PACOM Chief: A US Conflict With North Korea Will Be Either All Out War Or Nothing 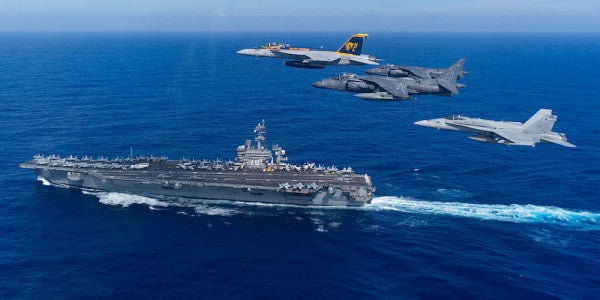 U.S. Navy Adm. Harry Harris, the head of U.S. Pacific Command, told the Senate Armed Services Committee on Thursday that the U.S. isn't planning a one-off “bloody nose” strike on North Korea, but is planning for either all out in war or not at all.

Senior administration officials are reportedly exploring the “bloody nose” strategy, which entails a limited strike to humiliate and intimidate North Korea. When asked about this during the Senate hearing, Harris said no such plan existed.

“We have no bloody nose strategy. I don't know what that is,” Harris said in response to a question from Virginia Sen. Tim Kaine, the U.S. Naval Institute reported.

Experts uniformly reacted in horror at the news that President Donald Trump's administration was reportedly planning a limited strike on North Korea, as they allege it would likely result in an all-out, possibly nuclear retaliation from Pyongyang.

According to Harris, the U.S. feels the same way.

“If we do anything along the kinetic spectrum of conflict, we have to be ready to do the whole thing,” Harris said, pouring cold water on the idea of a limited strike that would only have rhetorical ramifications.

Speculation over Trump's willingness to strike North Korea peaked after he dismissed Victor Cha, a widely respected Korea expert, as U.S. ambassador to South Korea on Jan. 31 after almost a year of consideration.