North Korea launched multiple short-range projectiles into the sea on Monday as part of firing drills, a week after it resumed missile tests following a three-month break 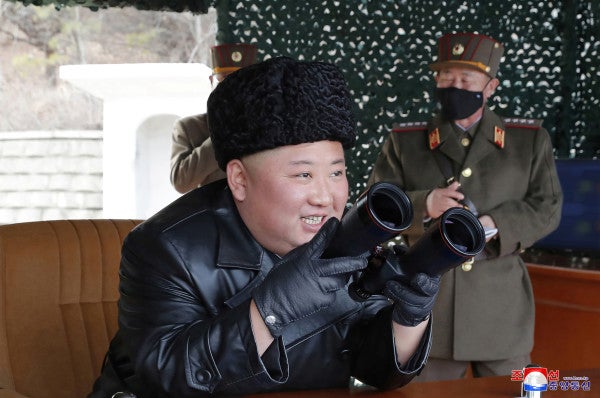 The projectiles, including from a multiple-launch rocket system (MLRS), flew up to 200 km (124 miles) and reached 50 km in altitude, South Korea's Joint Chiefs of Staff (JCS) said.

They were launched from the eastern coastal town of Sondok, home to a military airfield where nuclear-armed North Korea fired missiles last year, the JCS said in a statement.

The JCS said the latest test appeared to be part of firing drills that have been under way since late last month and have been overseen by North Korean leader Kim Jong Un.

After a three-month halt in missile testing, North Korea tested an MLRS on March 2.

The JCS expressed “strong regret” over the launch and said it was watching for any more tests.

“The ministers once again pointed out that the continued firing drills are unhelpful for efforts to build lasting peace on the Korean peninsula,” the Blue House said in a statement.

Japanese Defense Minister Taro Kono said the projectiles appeared to be ballistic missiles and did not fall into Japan's exclusive economic zone, though the government was examining details about the launch.

A U.S. official, speaking on condition of anonymity due to the sensitivity of the matter, said North Korea had fired at least three projectiles towards the eastern sea and a detailed analysis was being conducted.

China's foreign ministry called for all sides to use dialogue and show flexibility, saying the situation was “complex and sensitive”.

“We also urge parties to make positive efforts to calm the situation for talks to continue, and to realise the denuclearisation and lasting peace in this region and the peninsula,” spokesman Geng Shuang told a briefing.

North Korea's foreign ministry criticized the European stand as “U.S.-instigated reckless behaviour”. The sister of Kim Jong Un said the drills were not meant to threaten anyone.

Hopes were raised for dialogue with North Korea on its nuclear weapons and missiles when Kim met U.S. President Donald Trump for a historic summit in Singapore in June 2018.

But no significant progress has been made despite two more meetings between the leaders.