North Korea, China and ISIS were center stage — with some differences of opinion on coping with Kim Jong Un... 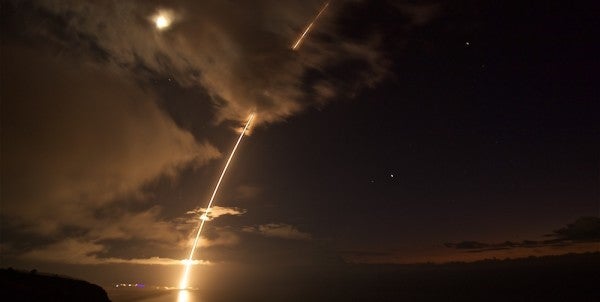 North Korea, China and ISIS were center stage — with some differences of opinion on coping with Kim Jong Un — at the annual Chamber of Commerce Hawaii military partnership conference Friday at the state Capitol.

Top commanders in Hawaii met with the business community to provide an update on plans. This year, with the state confirmed to be in range of newly developed North Korean ballistic missiles, a diversity of views on the threat level and how to deal with it emerged in one panel discussion on the topic.

Leaf, one of the panelists, noted Hawaii’s proximity to North Korea.

“We’re closer. Easier,” Leaf said, adding that the North’s nuclear missiles “are not aimed at South Korea, not at Japan.”

“The U.S. is the designated recipient — and that’s because we are public enemy No. 1 to North Korea,” he said.

During a question-and-answer session, state Rep. Gene Ward asked why the Pacific Missile Range Facility on Kauai, which has an Aegis Ashore missile firing test site, isn’t being weaponized for Hawaii’s defense.

“The question that you raise with regards to the defense of Hawaii — we are taking steps toward that,” said George Kailiwai, director of the requirements and resources directorate at Pacific Command, another panelist.

A “homeland defense radar” for Hawaii “is a high priority within the command,” Kailiwai said. Initial operating capability is expected in 2023. The possibility of adding interceptor missiles in Hawaii is “still under study,” he said after the session.

“We’re looking at the sensor first and then the interceptors second,” Kailiwai said.

Several hundred people attended the chamber’s Military Affairs Council’s partnership conference, which started at the state Capitol and ended with a luncheon at Washington Place and keynote speech by Adm. Harry Harris, head of the Pacific Command.

Harris said U.S. opportunities in the region are abundant, “but the path is burdened by several considerable challenges to include China, ISIS and, of course, North Korea.”

Some see actions by an increasingly assertive China in the East and South China Sea “as simply opportunistic,” he said, adding, “I do not. I view them as coordinated, methodical and strategic.”

Maj. Gen. Russ Mack, deputy commander of Pacific Air Forces, had earlier said China “is a strategic competitor moving quickly to shift the balance of power away from the United States.”

Harris also said that “ISIS is here in the Indo-Pacific and a clear threat that must be defeated.” He noted fighting in the southern Philippine city of Marawi last year in which government forces battled hundreds of ISIS-aligned fighters.

Marawi “serves as a wake-up call and rallying cry” for concern over radicals pushed out of Iraq and Syria who are spreading their ideology in the Pacific, Harris said.

North Korea, meanwhile, is the “most immediate challenge,” Harris said, with its leader, Kim, firing more missiles in six years than his father and grandfather combined.

Air raid sirens blared across Hawaii on Dec. 1 in a new monthly test in response to the emerging North Korean nuclear threat.

“While the possibility of a nuclear strike is slim, we now live in a world where we must be prepared for every contingency,” Harris said.

At the earlier panel discussion, some maintained that hurricanes and China are greater threats than North Korea.

The U.S. Missile Defense Agency previously said a new defensive missile under development with Japan, the SM-3 Block IIA, could add a second layer of missile defense for Hawaii beyond ground-based interceptors in Alaska and California.

The SM-3 IIA hasn’t yet been tested against intercontinental-range targets, but test-firings are planned this fiscal year from Kauai’s Aegis Ashore and from the Pearl Harbor destroyer USS John Paul Jones against missiles of intermediate range or less.