North Korea reportedly launched a Hwasong-12 intermediate-range ballistic missile in April 2017 that failed a few seconds into flight and... 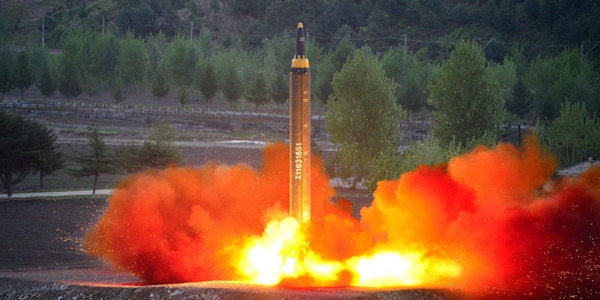 North Korea reportedly launched a Hwasong-12 intermediate-range ballistic missile in April 2017 that failed a few seconds into flight and came crashing down on a North Korean city.

The Diplomat's Ankit Panda and David Schmerler, of the James Martin Center for Nonproliferation Studies, cited a US government source as saying the missile failed a minute into flight and never went higher than 70 kilometers.

That initial minute of boosted flight propelled the missile 39 kilometers away to Tokchon, a city of about 200,000 people in North Korea's interior, according to Panda and Schmerler's investigation.

Satellite imagery scanned by the authors shows damage to industrial or agricultural buildings near a residential area. The Hwasong-12, with unburned liquid fuel, could still cause a massive explosion even without a warhead, though the authors concluded there were most likely few casualties.

But the fiery crash of a North Korean missile into a populated town demonstrates yet another threat posed by Pyongyang's nuclear ambitions.

North Korea has twice fired a Hwasong-12 missile over Japan. A similar failure in the launch process could see a large liquid-fueled missile crashing down on a populated Japanese town.

If such an accident were interpreted as a deliberate attack, it could spark a wider conflict.

Another danger pointed out by The Diplomat comes from North Korea's newly demonstrated ability to carry out surprise tests.

Using mobile missile launchers, which sometimes even have treads like a tank, North Korea showed in 2017 it could launch from virtually anywhere within its borders.

The unpredictability and mobility of North Korea's launches mean the U.S. or its allies would have a hard time preempting such a launch or even knowing where to look for one.