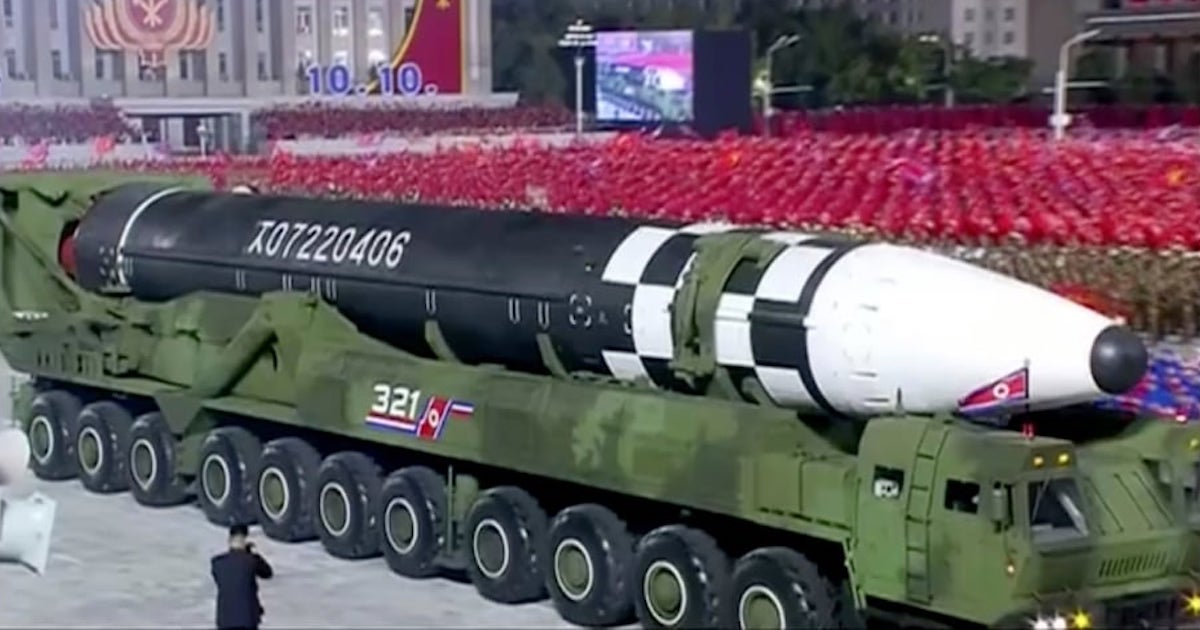 Analysts said the missile, which was shown on a transporter vehicle with 11 axles, would be one of the largest road-mobile intercontinental ballistic missiles (ICBMs) in the world if it becomes operational.

“This missile is a monster,” said Melissa Hanham, deputy director of the Open Nuclear Network.

Also displayed were the Hwasong-15, which is the longest-range missile ever tested by North Korea, and what appeared to be a new submarine-launched ballistic missile (SLBM).

Ahead of the parade, which was held to mark the 75th anniversary of the founding of its ruling Workers’ Party, officials in South Korea and the United States said Kim Jong Un could use the event to unveil a new “strategic weapon” as promised earlier this year.

A senior U.S. administration official called the display of the ICBM “disappointing” and called on the government to negotiate to achieve a complete denuclearisation.

“We will continue to build our national defence power and self-defensive war deterrence,” Kim said, but vowed that the country’s military power would not be used preemptively. He made no direct mention of the United States or the now-stalled denuclearisation talks.

Kim blamed international sanctions, typhoons, and the coronavirus for preventing him from delivering on promises of economic progress.

“I am ashamed that I have never been able to repay you properly for your enormous trust,” he said. “My efforts and devotion were not sufficient to bring our people out of difficult livelihoods.”

The video showed Kim make an appearance as a clock struck midnight. Dressed in a grey suit and tie, he waved to the crowd and accepted flowers from children while surrounded by military officials in Pyongyang’s recently renovated Kim Il Sung Square.

Kim spoke for nearly half an hour, often visibly sweating despite the cool morning air, shedding tears when thanking the troops, and smiling and laughing as he watched the missiles.

The parade was highly choreographed, with thousands of troops marching in formation, displays of new conventional military equipment including tanks, and fighter jets launching flares and fireworks.

The new ICBM is likely intended to dispel doubts about North Korea’s ability to strike the continental United States, and an implicit threat that they are preparing to test the larger missile, said Markus Garlauskas, a former U.S. intelligence officer for North Korea.

“If the Hwasong-15 could carry a ‘super-large’ nuclear warhead to anywhere in the U.S., then the natural question is what can this larger missile carry?,” he said.

Kim became visibly emotional as he thanked the troops for their sacrifice in responding to natural disasters and preventing a novel corovonavirus (COVID) outbreak.

He said he was grateful that not a single North Korean had tested positive for the disease, an assertion that South Korea and the United States have previously questioned.

While attendees at other celebratory events were shown wearing masks, no one at the parade appeared to be wearing them.

Kim said he hoped that North and South Korea would join hands again when the global coronavirus crisis is over.

South Korean officials said this week that Kim could use the event as a “low intensity” show of power ahead of the U.S. presidential election on Nov. 3, as denuclearisation talks with Washington have stalled.

In a congratulatory message to Kim for the anniversary, Chinese President Xi Jinping said he intended to “defend, consolidate and develop” ties with North Korea, its state media said on Saturday.