North Korea ended over two months of relative peace and quiet in grand fashion with it's Nov. 28 test of its Hwasong 15... 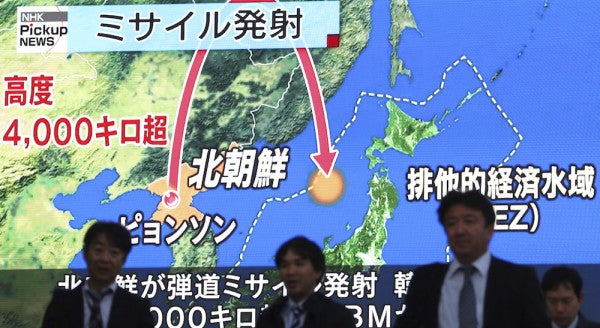 North Korea ended over two months of relative peace and quiet in grand fashion with it's Nov. 28 test of its Hwasong 15 intercontinental ballistic missile (ICBM). More details of the test will come to light in the next few days and weeks, but initial data about the test indicate Pyongyang’s steady progress on ballistic missile development despite increasingly stringent U.S. and international sanctions.

North Korea’s latest ICBM test does not fundamentally change the strategic challenge posed by Pyongyang, but it throws the failure of the Trump administration’s approach into stark relief. This would be a good time for Washington to critically reexamine its strategy rather than double down on a failing game plan.

The technical details of this missile test highlight the growing sophistication of North Korea’s nuclear forces. The height and range of North Korea’s two previous ICBM tests in July 2017 led some experts to conclude that the missile, dubbed the Hwasong 14, could range the west coast of the United States and strike major inland cities like Denver and Chicago. However, there was considerable debate within the expert community over the details of the Hwasong 14, including the missile’s payload (a lighter testing payload could lead to an artificially high range) and the ability of the missile’s reentry vehicle to successfully deliver a nuclear weapon.

The ICBM test on Nov. 28 should put some of the uncertainty regarding range to rest. The missile was lofted, flying very high up but not very far. Based on the record-setting apogee and flight time, David Wright of the Union of Concerned Scientists calculated that the missile would fly farther than 13,000 km if launched on a standard trajectory. This would place all of the United States comfortably in range. Wright cautions that the ICBM’s test payload may not represent the weight of a nuclear weapon, but the nuclear weapon would have to be exceptionally heavy to significantly reduce the range of the missile.

The ability to hold the entire United States at risk is an important milestone in the development of North Korea’s nuclear forces, but it does not represent a fundamental change in the strategic challenge facing the United States. The ability to hold U.S. cities at risk with nuclear weapons was a major strategic development, but the North Koreans have had this capability since the July tests of the Hwasong-14. The ICBM tested on Nov 28 puts all U.S. cities at risk rather than some. The Trump administration’s reaction to the missile test will carry more weight than the test itself.

Washington’s pattern of response to North Korean provocations suggests Trump will likely double down on “maximum pressure” in response to the latest ICBM test. This would entail the use of economic and military tools to further isolate Pyongyang’s economy and signal American resolve to keep tightening the screws despite North Korean missile testing. Chinese banks and entities that help North Korean companies evade sanctions could also be targeted for punishment.

More pressure will not change the current situation. Kim Jong-un views nuclear weapons as essential for his regime’s survival. Short of a complete shut-down of North Korean–Chinese economic activity—a move China is unwilling to take—economic pain will be uncomfortable but not existential for Kim and he will hold onto his nuclear weapons. Sanctions may slow down the development of new ballistic missile and nuclear weapon technologies, but this would not considerably improve the strategic picture for the United States now that North Korea has conducted several successful ICBM tests. Moreover, a statement released after the latest ICBM test suggest that North Korea is capable of manufacturing important technologies indigenously, which further insulates the weapons program from sanctions. Applying “maximum pressure” in the pursuit of denuclearization is nothing more than a flawed strategy chasing a chimerical goal.

Washington needs to use the ICBM test as an opportunity to reevaluate its strategy, set new goals, and develop new plans of action. Denuclearization is a noble goal, but it is not achievable in the short term and it should not be used as a precondition for direct negotiations between the United States and North Korea. Militarily, the United States should work to reduce the risk of crisis instability and escalation. Freezing B-1B bomber flights out of Guam would have little negative impact on America’s ability to deter North Korea and could be a useful opening point for negotiations. Militarily, the United States should eschew threats of trying to kill Kim Jong-un early in a war or disarming Kim of his nuclear weapons. Both of these threats place strong “use it or lose it” pressure on North Korea and increase the chances of a small incident spiraling out of control.

The latest test of an ICBM reinforces the cliché that there are no good options for North Korea. It is difficult to see how a military conflict to tear down the Kim regime wouldn’t go nuclear quickly, and even if the conflict stayed conventional it would be a great catastrophe for all parties involved. Denuclearization is a chimera and war would be a nightmare. Trump needs to learn how to deter and live with a nuclear North Korea.

Eric Gomez is a policy analyst for defense and foreign policy studies at the Cato Institute. This article originally appeared on The National Interest.