North Korea Just Tested A Missile That Could Reach Alaska

North Korea claims that it has launched its first intercontinental ballistic missile, or ICBM, which experts say could have the... 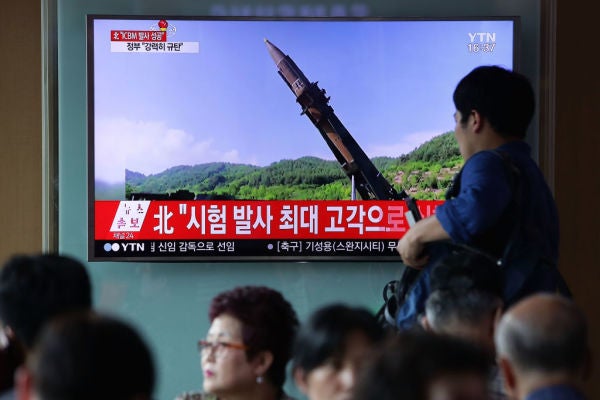 North Korea claims that it has launched its first intercontinental ballistic missile, or ICBM, which experts say could have the ability to reach Alaska.

State officials made the boast early Tuesday morning, several hours after the country launched a missile that landed in the sea near Japan. The North Korean government went so far as to say its new missile could hit any location on the planet, a claim whose validity was unclear.

South Korea had earlier warned that the test appeared more advanced than usual. The missile's trajectory had an unusually steep angle, suggesting it could travel farther than previous efforts.

The launch, which North Korea's state media said was ordered and supervised by leader Kim Jong Un, sent the rocket 933 kilometers, or 580 miles. North Korea announced a flight time of 39 minutes, though the US Pacific Command listed the flight time at 37 minutes. The rocket reached an altitude of 2,802 km, Reuters said.

David Wright, the codirector of the Global Security Program at the US-based Union of Concerned Scientists, said North Korea's claims suggested the missile may be powerful enough to “allow it to reach all of Alaska.”

In a blog post, he said: “If the reports are correct, that same missile could reach a maximum range of roughly 6,700 km (4,160 miles) on a standard trajectory.”

Officials from South Korea, Japan, and the US said the missile had landed in the sea near the coast of Japan after being launched near an airfield in Panghyon, about 100 km (60 miles) northwest of North Korea's capital, Pyongyang.

“The test launch was conducted at the sharpest angle possible and did not have any negative effect on neighboring countries,” North Korea's state media said in a statement.

South Korean President Moon Jae-in, who convened a National Security Council meeting, said his government was looking at the possibility that the missile was an ICBM, although it thought it more likely to be an intermediate-range version.

Analysts cited by Reuters said the flight details on Tuesday suggested the new missile had a range of more than 8,000 km, underscoring major advances in North Korea's project. Other analysts said they believed its range was not so far. ICBMs by definition have a minimum range of 5,500 km.

US President Donald Trump responded to the launch via Twitter. He called on China to “put a heavy move on North Korea” to stop the tests.

Trump criticized North Korean leader Kim for authorizing the launch, asking: “Does this guy have nothing better to do with his life?”

North Korea has just launched another missile. Does this guy have anything better to do with his life? Hard to believe that South Korea…..

….and Japan will put up with this much longer. Perhaps China will put a heavy move on North Korea and end this nonsense once and for all!

North Korea has long been working to develop a nuclear-tipped ICBM capable of hitting the US, ignoring repeated warnings from the international community.

Japanese Prime Minister Shinzo Abe on Tuesday said he would ask the presidents of China and Russia to play more constructive roles in efforts to stop Pyongyang's arms project.

“Leaders of the world will gather at the G-20 meeting” on Friday, Abe told reporters, according to Reuters. “I would like to strongly call for solidarity of the international community on the North Korean issue.”

China has urged “restraint” from all parties following the missile launch, according to AFP.

John Everard, the former British ambassador to North Korea, told Sky News: “This is not just bravado, this is a real threat.”