Train like you fight: Watch a North Korean soldier smash concrete with his head

'North Korean propaganda, when it comes to this stuff, is just more over the top.' 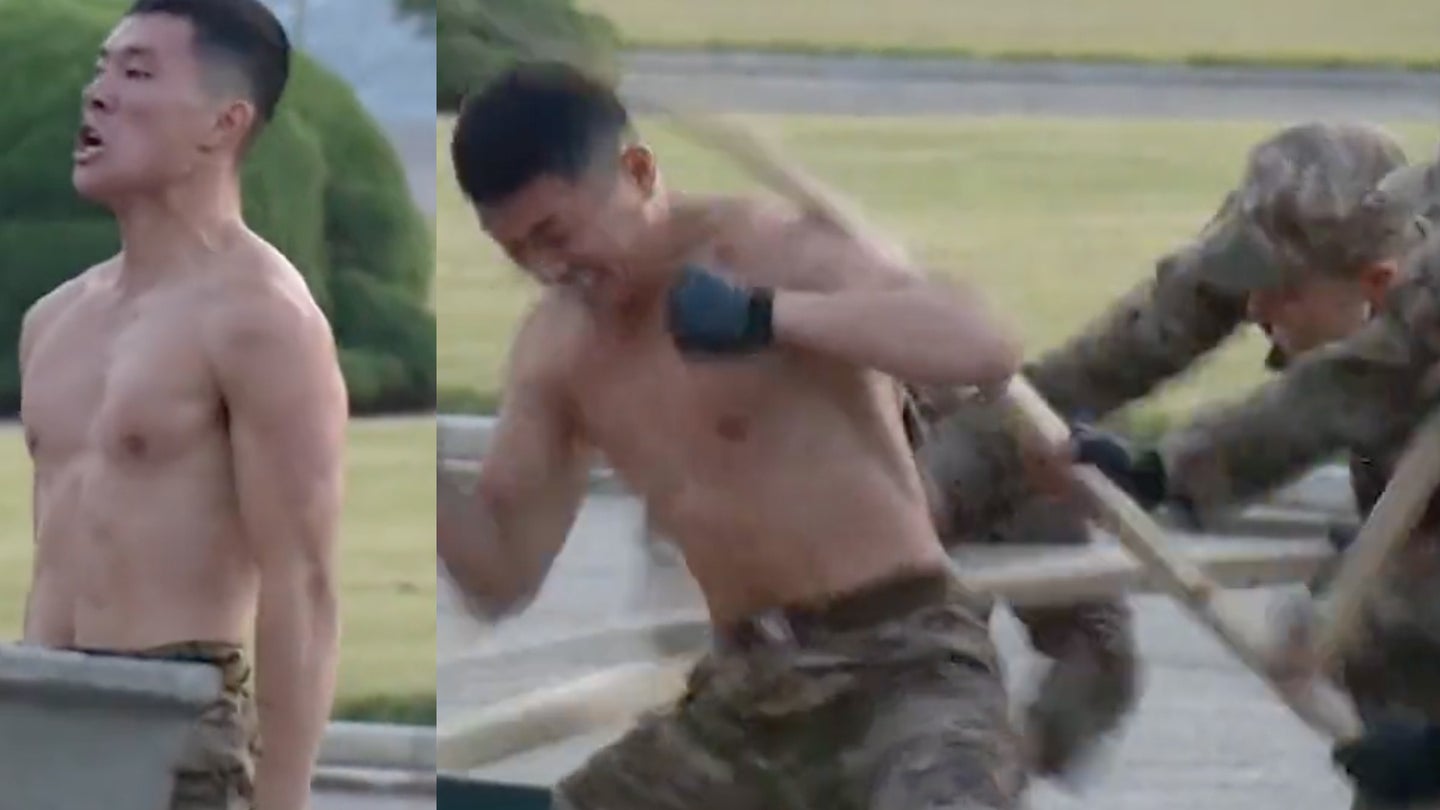 The North Korean military has harnessed the power of testosterone in a new propaganda video that shows bare-chested soldiers demolishing inanimate objects and surviving feats of pain that would get the most ardent sadomasochists whipped into a frenzy.

The “self-defense” exhibition took place on Monday and was later broadcast by North Korea’s state-run media. The country’s dictator, Kim Jong Un, can be seen enjoying the show as many of his subordinates clap Benny Hill style while North Korean troops show off their martial arts skills in a training montage that seems lifted straight from a 1980s action movie.

Among the many exhibitions of endurance are: North Korean troops destroying bricks and cinder blocks with their bodies; two men bending a metal rod with their throats; and one man breaking out of chains.

Two North Korean service members also show their immunity to pain in separate spectacles. One shirtless man lies down on a bed of spikes as his comrades place a hunk of concrete on his abdomen and then break it in half with a sledgehammer. Not to be outdone, another shirtless North Korean performs the same stunt, except he lies down on top of broken glass as the concrete slab is split.

As impressive as these achievements are, none of the North Koreans in the video are seen doing leg tucks or a standing power throw, so it is doubtful that they could pass the Army Combat Fitness Test.

The exhibition of circus-style antics is nothing new, as North Korea has produced such propaganda videos for years, experts said.

“It is difficult to know who the intended audience is, but I think the ‘convention/exhibition’ this week is an attempt to demonstrate North Korean capabilities without the expense of the typical parade,” said retired Army Col. David Maxwell, a senior fellow with the Foundation for the Defense of Democracies think tank in Washington, D.C. “These events are likely for multiple target audiences both internal and external.”

Maxwell noted that South Korea also shows off how its special operations forces are experts at martial arts. In videos like these, South Korean troops can be shown training for hand knife fighting, demolishing their own cinder blocks, and performing Chuck Norris-like kicks to a cheering crowd.

The most recent North Korean action fest was part of Kim’s exhibition of his country’s newest and most sophisticated weaponry, including Intercontinental Ballistic Missiles and an apparent hypersonic weapon. This spectacle has included its share of bizarre moments, such as when Kim reportedly said that he felt “bottomless pride” as he touched the missile, according to the BBC.

In a photo with Kim and nearly 30 North Korean soldiers, one of the troops can be seen wearing a skin-tight blue outfit that has earned him the nickname “captain DPRK” and “rocket man” on social media, the Associated Press reported.

While other oppressive regimes often show off their military in propaganda to project strength, North Korea appears to be in a world of its own, said Jeffrey Lewis, director of the East Asia Nonproliferation Program at the Middlebury Institute’s James Martin Center for Nonproliferation Studies.

But Maxwell said he did not see anything substantively different in North Korean propaganda compared to other regimes.

“In terms of the military hooah videos there is nothing really unique about it,” said Maxwell, a retired Green Beret. “Most major militaries put out videos along these lines and show off their cool guy capabilities to include the U.S. military.”

For now, the Pentagon is not commenting on North Korea’s latest propaganda video, but one thing is certain: No cinder block or concrete slab is safe from North Korea’s shirtless soldiers.