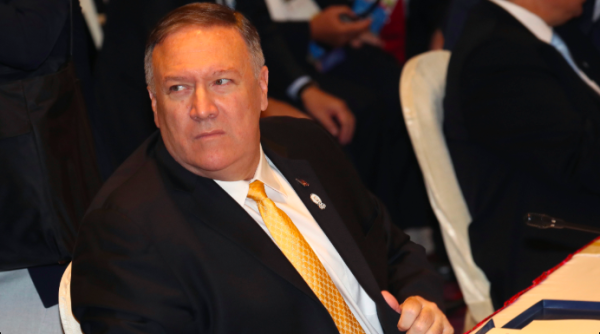 BANGKOK — The Trump administration was hoping to quietly resume nuclear-disarmament talks with North Koreans at a major Asian summit here this week. But Pyongyang's officials were a no-show, once again snubbing U.S. envoys and casting fresh doubts about President Trump's initiative to persuade Kim Jong Un to shed his ample nuclear arsenal.

Secretary of State Michael R. Pompeo attended the annual meeting of a 10-nation bloc of Southeastern Asian countries, which concluded Saturday in Bangkok. And it was expected he would meet with his North Korean counterpart. But Pyongyang's foreign minister, Ri Yong-ho, canceled his trip to Bangkok at the last minute for undisclosed reasons.

“We stand ready to continue our diplomatic conversation with the North Koreans,” Pompeo said after it became clear there was no one to meet with. “I regret that it looks like I'm not going to have an opportunity to do that while I'm here in Bangkok.”

In addition to skipping the Assn. of Southeast Asian Nations conference, or ASEAN, North Korea launched two ballistic missile tests during the summit. While such tests are not banned as part of any nuclear agreement, many observers assessed that the North Korean leader was reminding the world of his military capabilities.

Trump, following an unprecedented encounter with Kim in June in the demilitarized zone dividing North Korea and South Korea, said he was confident talks would resume soon. Trump began his courting of Kim in a historic summit between the two leaders in Singapore last year, but it seemed to fall apart in a contentious session in Hanoi.

The administration is still waiting for North Korea to name a working group to hold technical talks with a U.S. team led by special envoy Stephen Biegun. Biegun also attended the Bangkok conference in anticipation of talks with the North Koreans that did not materialize.

When not dealing directly with Trump, North Korean officials have often snubbed or attacked U.S. counterparts. They accused Pompeo of making “gangster-like” claims last year, and have failed to attend meetings or even answer the phone at times as Americans attempted to relaunch talks.

Attempting to make a deal with Kim is arguably Trump's largest foreign policy gamble. Despite his proclamations of an excellent relationship with Kim and a diminished nuclear threat from the country, North Korea has stuck to what veteran diplomats call its traditional playbook of missed meetings, broken pledges and feints for time.

Trump, however, seeks to portray his dealings with North Korea as a triumph as he heads into his reelection campaign. The most bellicose rhetoric from Kim's government, which Trump matched in kind, has indeed subsided. But no progress in significant denuclearization has been recorded. And, the Trump-Kim Hanoi summit earlier this year broke down, U.S. officials said, when Pyongyang demanded broad relief from economic sanctions imposed by the international community in exchange for a limited shut-down of a portion of its nuclear infrastructure.

Rather than acknowledge any failure in negotiating with North Korea, the Trump administration seems to have reduced its expectations. Officials recently said an interim arrangement of freezing North Korea's nuclear capabilities where they are, instead of eliminating them, might be an acceptable short-term position until a longer term agreement is reached. This would please Kim, whose primary goal, experts say, is to be recognized as a member of the club of global nuclear powers.

U.S. officials say that “communication” does continue between Washington and Pyongyang, though it is not clear at what level. The officials said North Korea's failure to attend the ASEAN conference was both telling and damaging for Kim's position.

It “didn't keep North Korea from being a major topic of discussion,” a senior State Department official told a small group of reporters in Bangkok. “If anything, the absence of North Korea allowed for a more open and candid discussion on how to achieve the goals of diplomacy that President Trump has laid out.”

The official, who asked not to be identified in order to discuss diplomatic matters, said North Korea's actions — including the missile tests — have galvanized international determination to rein in Kim.

“Unfortunately, the North Koreans missed this opportunity,” the official said.

State Department officials acknowledged that the missile tests were a “provocation” that were “unwelcome.” They insisted that Pyongyang was squandering any international support it might have.

“And those provocations, paired with a failure to follow through on their own commitments to engage in diplomacy, were noticed by virtually every country attending this summit meeting over the last three days,” the official said.

“And there is a common view that this is a huge mistake and a self-inflicted damage on their own part.”

Pompeo used the Bangkok meetings to solidify Chinese support for efforts with North Korea and to help resolve disputes between Japan and South Korea over trade and other issues. China wields considerable influence over North Korea as its main trading partner and has publicly supported sanctions against Pyongyang while at the same time, on occasion, subverting them. Japan and South Korea, also, are key to a united front putting pressure on North Korea.

In contrast to his diplomats, Trump, who ranks his perceived personal relationships with other world leaders over a clearly articulated policy, has downplayed North Korea's recalcitrance.

“Chairman Kim does not want to disappoint me,” Trump said on Twitter Friday. “Chairman Kim has a great and beautiful vision for his country, and only the United States, with me as President, can make that vision come true. He will do the right thing because he is far too smart not to, and he does not want to disappoint his friend, President Trump.”