North Korean dictator Kim Jong Un’s celebration of his country’s military might ended in an embarrassing whimper last night when... 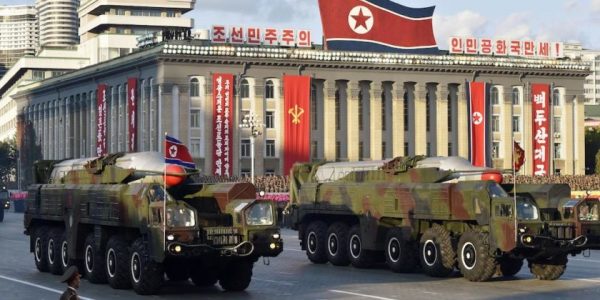 South Korea’s Joint Chiefs of Staff said it detected a failed launch from the city of Sinpo, the site of the North’s submarine base.

U.S. commanders in the Pacific detected the launch and said the ballistic missile “blew up almost immediately.”

The defeat for the North was a stark contrast to the propaganda parade of intercontinental ballistic missiles rolling through Pyongyang and hundreds of soldiers high-stepping through the capital’s streets — all orchestrated as in a bold show to the world that the isolated Asian country would not back away from its nuclear ambitions.

Un did not speak during the annual parade celebrating the 1912 birthday of his late grandfather, Kim Il Sung, who founded the country, but the North’s No. 2 official warned the country would stand up to any threat.

Korea watcher Bruce Bennett of the RAND Corporation said the parade and bellicose accusations are all “bravado.”

“They are trying to make a point about how they are feeling vulnerable and they are concerned that outside powers are trying to attack them,” Bennett told the Herald.

Regardless, Bennett said the North is responding to the U.S. moves in “a typical North Korea fashion.”

“North Korea doesn’t say let’s negotiate,” he said. “Instead (Kim Jong Un) tries to demonstrate power to convince the outside world that they should be afraid of him and anxious to start a conflict.”

The North’s parade on its most important holiday came amid growing international worries that North Korea may be preparing for its sixth nuclear test or a major missile launch like its first flight test of an ICBM capable of reaching ?U.S. shores.

The elaborate display of the state’s military power drew tens of thousands of participants, including goose-stepping soldiers and crowds of civilians who have spent weeks perfecting their ability to wave plastic flowers in unison.

A series of what appeared to be KN-08 missiles were among the weapons rolled out on trucks. Analysts say the missiles could one day be capable of hitting targets as far as the continental United States, although North Korea has yet to flight test them.

Cold-launch capabilities and solid fuel for its missiles were hinted in the military display and could pose challenges to U.S. strikes against the weapons.

Bennett said the arms were likely mock-ups, and the new weaponry would need to make it through testing before it’s a serious threat.

“At this stage,” Bennett said, “they are trying to influence international opinion: ‘Look we are strong. You cannot do something to us without causing problem, and the ICBMs are focused on the U.S.’”