US, South Korea Fire Missiles In Show Of Force Against North Korea

The United States and South Korea fired their own missiles July 5 in a warning after the North launched an... 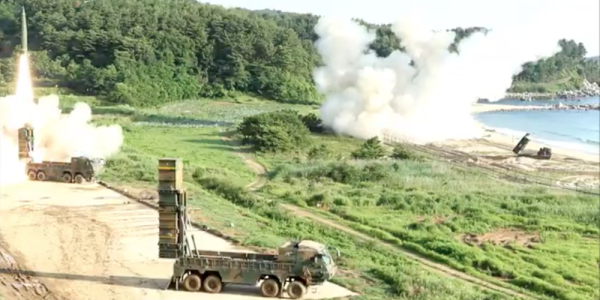 The United States and South Korea fired their own missiles July 5 in a warning after the North launched an intercontinental ballistic missile.

The live-fire exercise came as Secretary of State Rex Tillerson confirmed that the communist state fired an ICBM on Tuesday, saying it “represents a new escalation of the threat to the United States, our allies and partners, the region, and the world.”

U.S. Pacific Command’s initial assessment was that the North had fired an intermediate-range missile.

In an unusual move, the statement directly linked the exercise with North Korea’s missile test the day before, saying it was “countering North Korea’s destabilizing and unlawful actions on July 4.”

“The system can be rapidly deployed and engaged,” it said. “The deep strike precision capability enables the (South Korean)-U.S. Alliance to engage the full array of time critical targets under all weather conditions.”

North Korea said Tuesday that the Hwasong-14 missile was fired while leader Kim Jong Un watched. It flew for 39 minutes and reached an altitude of more than 1,740 miles before crashing into the sea near Japan. It traveled about 580 miles, according to state-run media.

It was the first missile test in nearly a month and came days after the U.S. and South Korean presidents met in Washington for their first summit.

Tillerson said the U.S. plans to call on the U.N. Security Council to enact stronger measures against the North.

“Global action is required to stop a global threat,” he said in a statement.

He also warned that any country that hosts North Korean workers, provides economic or military benefits to the North or fails to implement U.N. sanctions “is aiding and abetting a dangerous regime.”

Tillerson stressed the U.S. is only seeking the peaceful denuclearization of the Korean Peninsula and “will never accept a nuclear-armed North Korea.”