The missiles, which were fired from near the northeastern city of Hamhung at 5:32 a.m. and 5:50 a.m., flew 400 km at a peak altitude of 48 km, the South Korean military said, adding that there was a high chance of additional launches coming amid the North's own summer military drills and joint exercises between the U.S. and South. 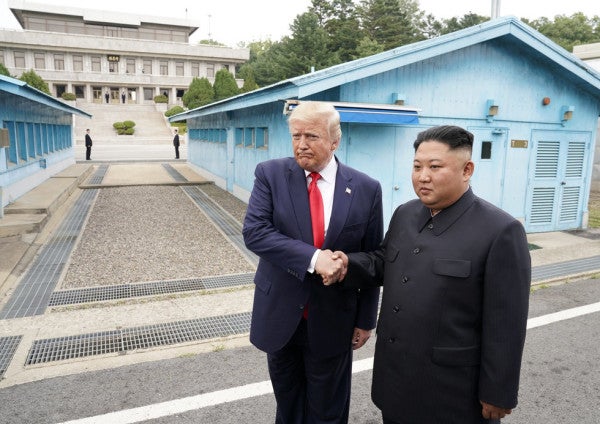 The missiles, which were fired from near the northeastern city of Hamhung at 5:32 a.m. and 5:50 a.m., flew 400 km at a peak altitude of 48 km, the South Korean military said, adding that there was a high chance of additional launches coming amid the North's own summer military drills and joint exercises between the U.S. and South.

The South's presidential Blue House said the weapons were believed to be short-range ballistic missiles, raising the prospect that they were similar to recent tests of its KN-23 missile, which appears to be built to avoid detection.

“They believed that the moves are apparently a show of force against the combined military exercise between South Korea and the U.S.,” a Blue House spokesman said in a statement.

A Pentagon official told The Japan Times that Washington was “aware of reports of a missile launch from North Korea,” and that it would “continue to monitor the situation.”

“We are consulting closely with our Japanese and South Korean allies,” the official said.

In Tokyo, the Defense Ministry said in a statement that none of the projectiles had landed in the country's territorial waters or its exclusive economic zone, and that the launches did not affect its security.

The KN-23 missile is solid-fueled and launched from a truck, meaning it can be easily hidden and rapidly deployed. It flies quickly at low altitudes and is maneuverable, making it easier for the missile to evade radar detection. The North has tested the missile, a modified version of the Russian Iskander, several times over the past three months, despite being subject to U.N. sanctions that bar it from testing any ballistic missile technology.

Trump, who has downplayed the recent tests, said just hours before the launches that he had received “a very beautiful letter from Kim Jong Un” on Thursday.

“He really wrote a beautiful, three-page — I mean, right from top to bottom — a really beautiful letter,” Trump said. “And maybe I'll release the results of the letter, but it was a very positive letter.”

Trump said the North Korean leader had voiced dissatisfaction in the letter with joint U.S.-South Korean military exercises currently being held on the peninsula.

“He wasn't happy with … the war games,” Trump said.

The U.S. president, who has met with Kim three times since June last year, also raised the possibility of another summit with the young dictator.

“I think we'll have another meeting,” he said without elaborating.

Kim on Wednesday blasted the exercises, saying that Tuesday's weapons test would “send an adequate warning to the joint military drill now underway by the U.S. and south Korean authorities.”

A day earlier, the North's Foreign Ministry ripped into the exercises, labeling them a “flagrant violation” of efforts to reach peace on the Korean Peninsula and reflecting a lack of “political will” by Seoul and Washington to improve relations. A ministry spokesman said that if the drills continued, the North “will be compelled to seek a new road.”

U.S. officials have said stalled denuclearization talks with the North Koreans will happen “soon,” but have admitted that a time and location have yet to be set.

The U.S. said after Trump's meeting with Kim at the truce village of Panmunjom on the border between the two Koreas in late June that the talks would begin sometime in July. That time frame has come and gone, but the U.S. has said the two sides are still in contact.

“The alliance drills are much less provocative than North Korea's testing of missiles that Pyongyang boasts are indigenous but which are likely filled with sanctions-violating foreign technology,” said Leif-Eric Easley, a professor at Ewha University in Seoul.

The military drills, lasting about two weeks, are reportedly command-post exercises mostly involving computer simulations, not mobilization of troops or military equipment, while also testing South Korea's capabilities in retaking operational control over its forces from the United States during wartime.

The exercises, which began on a low-key note, went ahead despite earlier warnings by Pyongyang, which views the drills as a rehearsal for invasion.

A U.S. Forces Korea spokesman told The Japan Times earlier in the week that the two militaries “continue to train in a combined manner at echelon while harmonizing our training program with diplomatic efforts by adjusting four dials: size, scope, volume and timing.”

Observers say Trump is betting that by keeping the joint exercises low-key, the U.S. can still convince the North to return to the bargaining table once the drills wrap up.

The latest launch comes after the North on Tuesday fired two apparent short-range ballistic missiles into the Sea of Japan. It had earlier conducted tests, including launches believed to be of the KN-23, on Aug. 2, July 31 and July 25, resuming its weapons testing after a 77-day halt.

The ramped-up pace of testing has stoked fears of a return to 2017, when the nuclear-armed country conducted 21 missile tests, including launches of intermediate-range ballistic weapons over Japan and an intercontinental ballistic missile capable of striking most, if not all, of the contiguous United States.

Easley said the goal of the North's recent tests was to target cracks in the U.S.-South Korean alliance.

Trump said Wednesday that he expects South Korea to pay more for the costs of maintaining U.S. troops there.

The mercurial U.S. leader has repeatedly criticized Seoul and Tokyo, the top American security allies in Asia, for not sharing enough of the financial burden of basing U.S. forces in the two countries. The U.S. has some 28,500 troops in South Korea and approximately 50,000 in Japan.

Trump has also come under fire for not doing enough to stem increasingly rancorous ties between South Korea and Japan.

“Breaking the alliance is exactly what Pyongyang wants, which is why it makes all this noise and tries to blame U.S.-South Korea drills for its lack of cooperation,” Easley said.

“Pyongyang looks to exploit Trump's preoccupation with alliance cost-sharing as well as South Korea's deteriorating relations with Japan,” he added. “Kim appeals to Trump directly about the exercises, trying to drive a wedge between Washington and Seoul. Meanwhile, North Korean propaganda supports rising anti-Japan sentiment in South Korea, calculating that a diplomatically isolated Seoul will be more subject to Pyongyang's coercion.”