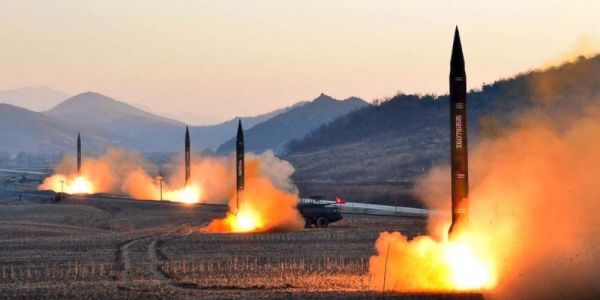 North Korean state media released images of Kim Jong Un visiting a plant that makes rocket engines for the country's ballistic missile program, and they reveal capabilities and intentions that paint a nightmare scenario for the U.S..

“Today is a very bad day,” George Herbert, an Aerospace consultant and rocket engineering scientist who works with the U.S.'s premiere North Korean missile analysts wrote in response to the pictures.

To the untrained eye, the pictures of Kim touring the missile plant look like nothing special. Kim beams a broad smile next to a diagram. Kim walks past a big spool of wire-looking things. Kim runs his hand over a big weird block of… something.

But as is often the case in North Korean propaganda images, each shot reveals an important message about the state of the country's notoriously opaque missile development. In the case of this recent batch of photos, North Korea sought to prove the U.S. wrong on all its most wishful thinking.

With its photo gallery on Wednesday, North Korea demonstrated that it's hot on the trail of technologies that can match the U.S.'s ability to throw huge nuclear payloads across massive distances.

Here's what experts have to say about the images published by North Korea.

3 of 8
North Korean leader Kim Jong-Un looks on during a visit to the Chemical Material Institute of the Academy of Defense Science in this undated photo released by North Korea's Korean Central News Agency (KCNA) in Pyongyang on August 23, 2017.Photo via KCNA/Associated Press

North Korea's new missiles will be advanced and lightweight, and Kim wants you to know that.

Herbert told Business Insider that North Korea appears to have made leaps and bounds in its application of composite materials to its missile program.

Instead of heavy sheets of aluminum, North Korea now looks ready to use kevlar and carbon fibre materials to drastically reduce the weight of the missiles, and thereby the range or payload.

“The significance is that those casings weigh about half as much. Either you can carry a bigger payload or you can go further,” said Herbert.

North Korea appears on the verge of making solid-fueled missiles, which would be a major breakthrough and a nightmare for the U.S. to stop.

But the design of the motor also indicates that it will use solid fuel, which would be a nightmare for the U.S.. Liquid-fueled rockets require huge teams to fuel the missile and prepare it for launch.

The process on large missiles can take a half hour and requires a long convoy of trucks. This makes the process easy to spot and potentially disrupt for the U.S. military. Solid fueled rockets based on trucks can just park and fire in minutes. The U.S. has no chance of stopping such a launch from a remote place in North Korea.

“The most advanced solid rocket motors use advanced carbon fibre and kevlar,” said Herbert, indicating that North Korean missiles could soon approach the effectiveness of advanced U.S. or Russian missiles.

Herbert identified the solid fueled, kevlar-wrapped missile that North Korea showed off as the Pukgukgsong-3, or the third version of North Korea's submarine-launched missiles.

A nuclear-armed North Korea is scary, but if North Korea could arm even a few of its 60 or so submarines with nuclear missiles, even with the U.S.'s massive advantage in submarines and submarine hunting, it would present a likely unsolvable puzzle for the U.S. military.

Additionally, missiles launched from submarines don't need to have ICBM ranges, as they can get close to a target. Regardless, Herbert said the new materials would probably boost the range of the missiles by 30 or 40 percent.

In this image made from video of a news bulletin aired by North Korea's KRT on Wednesday, Aug. 23, 2017, leader Kim Jong Un visits the Chemical Material Institute of Academy of Defense Science at an undisclosed location in North Korea. North Korea's state media released photos that appear to show concept diagrams of the missiles hanging on a wall behind leader Kim Jong Un, one showing a diagram for a missile called “Pukguksong-3.” Independent journalists were not given access to cover the event depicted in this photo.

But the Pukguksong-3 wasn't the only missile revealed in the images. North Korea is also planning an update to the KN-08 or Hwasong-13, a ballistic missile with an even further range than its current ICBM.

Herbert said North Korea is in the process of updating the Hwasong-13, a massive ICBM that can carry a huge payload all the way to New York City from North Korea.

Here's the Hwasong-13 on parade in North Korea.

The missile has never been successfully tested, but the images from North Korea's missile plant shows its serious about sticking with this program.

If North Korea gets this missile working, it will be an even more powerful ICBM that can send a heavier payload deeper into the U.S..

North Korean leader Kim Jong-Un looks on during a visit to the Chemical Material Institute of the Academy of Defense Science in this undated photo released by North Korea's Korean Central News Agency (KCNA) in Pyongyang on August 23, 2017.Photo via KCNA/Associated Press

Here's Kim with that funny grey block, which is actually a vital component necessary to delivering a nuclear warhead.

Herbert said this block is “essentially reinforced carbon carbon” which is a super heat and pressure-resistant material used for the nose of the warhead.

When a ballistic missile fires, the rocket engines blast it into space, but only the reentry vehicle, which holds the warhead, remains. To get through the earth's atmosphere at many times the speed of sound, North Korea needs advanced materials like reinforced carbon carbon.

North Korea may have shared these images in responses to stories that its reentry vehicle failed in previous tests.

This is a huge block of reinforced carbon, and Herbert thinks North Korea may be trying to say “we have as much of this stuff as we need.”

Back to the diagrams, Herbert says that although North Korean propaganda is skewed and overly optimistic, “the numbers feel right.”

The diagrams “appear to be the numbers describing the conditions of reentry” including “how much pressure and heating as its coming back into the atmosphere.”

Basically, North Korea just showed off a wide range of different components for extremely deadly and effective nuclear ballistic missiles, and they all look about right.

North Korea seems sick and tired of the U.S. and international community doubting its nuclear and missile technology, so they put out images to shut up the doubters.

No doubt North Korea plans to build and test these devices if left unchecked. “This is their way of telling us what we'll see in the air in the coming year,” Jeffrey Lewis, the founding publisher of Arms Control Wonk, wrote on Twitter.

With these pictures, the media got a look under the hood of North Korea's missile manufacturing and the overwhelming impression that its coming for the U.S..

North Korean ICBM's that can strike New York or Washington, submarines that can sneak along coastlines and cripple cities, and solid-fueled rockets that can take off with a moment's notice will all become reality in the coming years, if left unchecked.