South Korean diplomats emerged from a meeting with North Korean leader Kim Jong Un on Tuesday with the shocking news... 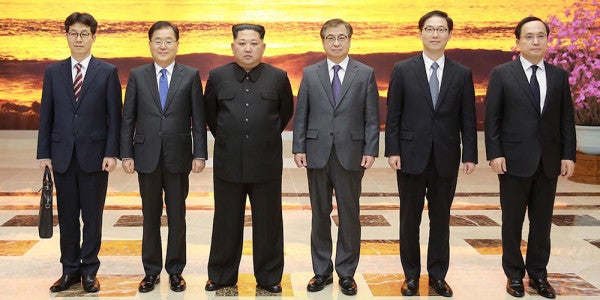 South Korean diplomats emerged from a meeting with North Korean leader Kim Jong Un on Tuesday with the shocking news that Pyongyang would agree to talk to the U.S. about denuclearizing — but reports indicate it was doing something mysterious at its nuclear reactor right before the talks.

On February 25, 38 North, a website of expert analysis of imagery and reporting from North Korea, detected plumes of vapor emanating from the generator hall of North Korea's Yongbyon Nuclear Scientific Research Center.

“As the evidence suggests, it means North Korea has resumed production of plutonium presumably for its nuclear weapons program,” according to the website.

Only weeks later, on March 6, and without any material change in the U.S. or South Korea's position towards North Korea save for another U.S. sanctions push, Kim reversed course on the country's nuclear program, according to South Korea's president's office.

But in responding to North Korea's reported overtures of peace, President Donald Trump expressed doubt, tweeting that it may “be false hope, but the U.S. is ready to go hard in either direction,” likely referencing both diplomacy and fighting.

North Korean leader Kim Jong Un (3rd from the left) posing for a photo with Chung Eui-yong (2nd from the left), the head of the South Korean presidential National Security Office, and delegation members after their meeting at Kobangsan Guesthouse in Pyongyang, North Korea on March 5, 2018.South Korean Presidential Blue House/Handout/Sipa/Associated Press

According to Yun Sun, an expert on North Korea at the Stimson Center, North Korea both preparing nuclear material and discussing denuclearization “sounds like North Korea is also prepared on both sides.”

“We know that North Korea's nuclear stock is limited,” Sun told Business Insider, explaining that North Korea would have to enrich more radioactive material to create more nuclear warheads, something satellites can normally spot from space.

“For North Korea this is not atypical,” Sun said about Kim talking diplomacy on one hand while possibly preparing more nuclear weapons on the other.

“North Korea has its programs ongoing,” Sun said. “Before they have a deal, they'd probably see any nuclear activity as justified because there's no deal.”