North Korea Says Nuclear War ‘May Break Out Any Moment.’ That’s The Last Thing It Wants

North Korea's deputy UN ambassador said on Oct. 16 that tensions on the peninsula had escalated to the point that... 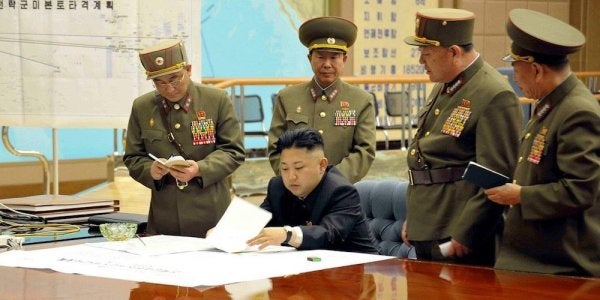 North Korea's deputy UN ambassador said on Oct. 16 that tensions on the peninsula had escalated to the point that “a nuclear war may break out any moment.”

This is exactly the kind of bluster Pyongyang has engaged in for decades.

On the surface, the latest U.S. military movements may look like preparations for a preemptive strike on North Korea's nuclear infrastructure. But it's clear the two forces are still locked in a stalemate.

The USS Michigan, a stealthy submarine laden with 150 Tomahawk cruise missiles, just arrived in the South Korean port of Busan. It most likely carried Navy SEALs and covert submarines designed for operations deep behind enemy lines.

U.S. bombers frequently train to strike North Korean targets. Stealth jets like F-35s and F-22s wait in the wings in case of conflict. A US aircraft carrier decked out with dozens of fighter and electronic attack aircraft sits just off North Korea's shores.

But experts say none of that really matters.

Tom Plant, the director of the proliferation and nuclear policy program at the Royal United Services Institute, said that “the U.S. always, at all times, has an overwhelming superiority over North Korea,” so a few new jets aren't likely to change things.

“In terms of its precision-strike technology, in terms of its ability to put metal on targets,” there is never really a contest of the U.S. and South Korea versus North Korea, Plant told Business Insider.

But a stalemate remains. The Pentagon has estimated that North Korea has enough artillery to kill as many as 20,000 people in South Korea each day, the Los Angeles Times reported. This all but precludes a U.S. preemptive strike.

Additionally, though a major naval drill recently began, Plant said he didn't see any evidence of a swell of ground troops that would indicate war is likely.

While the U.S. would strike North Korea to prevent widespread death and destruction in the U.S. or any of its allies' homelands, it hasn't come to that point.

North Korea on Oct. 16 appeared to acknowledge it didn't have a credible way of striking the U.S., with an official telling CNN that the country needed to conduct more tests. A strike on South Korea or Japan would also result in a smoldering Pyongyang.

“The last person who wants conflict on the [Korean Peninsula] is Kim Jong Un,” Yong Suk Lee, the deputy assistant director of the CIA's newly created Korea Mission Center, previously said, referring to the North Korean leader. Lee added that Kim had “no interest in going toe-to-toe” with the U.S.

The rational but paranoid North Korea has made a habit of making grandiose threats as it stares down superior conventional and nuclear military power from the U.S. and South Korea.

North Korea has found that the best way to protest U.S. military strength near its borders is to float the idea that nuclear war may be just a moment away, but that's the last thing it wants.