US Intelligence: North Korea Finally Has Nukes That Can Fit Onto ICBMs

A confidential U.S. intelligence report reviewed by The Washington Post concluded that North Korea had made a breakthrough and could now build... 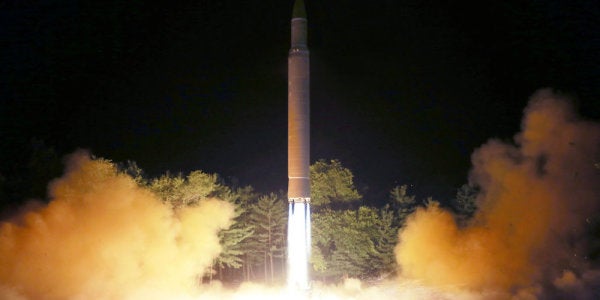 A confidential U.S. intelligence report reviewed by The Washington Post concluded that North Korea had made a breakthrough and could now build nuclear bombs small enough to fit on missiles.

The intelligence community “assesses North Korea has produced nuclear weapons for ballistic missile delivery, to include delivery by ICBM-class missiles,” a portion of the assessment reads, according to The Post.

The report also says the U.S. has calculated that North Korea has 60 nuclear devices, according to The Post, a huge increase over experts' previous assessments.

In the event of a military conflict, the U.S. would attempt to destroy or seize all North Korea's weapons, so 60 targets would represent an incredibly difficult task.

Analysts have long suspected North Korea could make a small-enough device to launch atop a missile, but this is the first known internal government document to acknowledge the technology.

In March 2016, North Korean leader Kim Jong Un posed in front of a silver ball that North Korean propaganda called a miniaturized nuclear warhead, but analysts doubted the isolated regime's ability to construct such a device.

North Korea has recently been improving its missile program by leaps and bounds, twice demonstrating in July a missile that could strike the U.S. mainland.

President Donald Trump has increasingly focused on North Korea, and the US succeeded last week in bringing together all 15 members of the UN Security Council to impose tough sanctions on Pyongyang.

However, experts told Business Insider the sanctions would not curb North Korea's missile programs, and it seems more likely that the U.S. must rely on nuclear deterrence to check an increasingly capable Kim regime.