The U.S. has spent at least $40 billion on a missile defense system intended to knock down or deter intercontinental ballistic missiles... 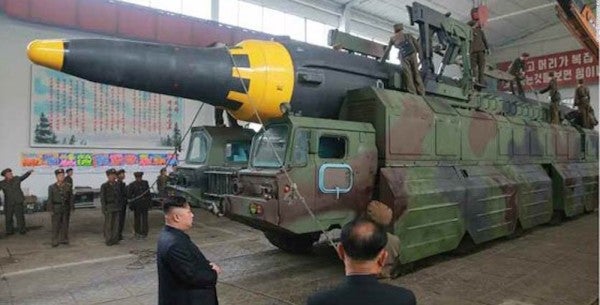 The U.S. has spent at least $40 billion on a missile defense system intended to knock down or deter intercontinental ballistic missiles fired by North Korea, but actually using the system could lead to an accidental nuclear war with Russia, according to an expert.

Jeffrey Lewis, the founding publisher of Arms Control Wonk, took to Twitter to detail how the U.S. could find itself exchanging nuclear salvos with Russia if it ever tried to shoot down an incoming North Korean ballistic missile.

The U.S.'s Missile Defense Agency, which operates the Ground-Based Midcourse Defense (GMD) missile shield, told Business Insider in May that in the event of a real incoming threat, they would launch several interceptors to increase the chances of knocking out the missile.

Lewis pegs this figure at about four or five interceptors.

But only one interceptor missile could hit the threat. The others would continue streaking through the high atmosphere towards Russia and China.

The problem is that, in that moment, while U.S. missile defense forces are praying their interceptor hits North Korea's nuclear missile, they're also relying on Russia to be able to tell that the other interceptor missiles aren't a salvo of US nukes.

There's plenty of reason to believe Russia can't do that.

So, now the fun part. Let's say one hits. What do you think happens to the other interceptors? They keep going. Into Russia. 5/ pic.twitter.com/FJu63JjPAo

While North Korea, the U.S., Japan, South Korea, and much of the world agree that North Korea's Hwasong-14 missile flew for about 37 minutes to a high point of about 1,800 miles, Russian intelligence assesses that the missile flew for just 14 minutes and reached a height of only 332 miles.

It is possible that Russia's public estimation was so different because it wanted to block UN condemnations and further sanctions on North Korea, by objecting to the consensus that the missile was an ICBM, as it already has.

It is also possible Russia legitimately thinks the missile was far short of an ICBM because their early warning system “stinks” as Lewis put it on Twitter.

For years, Russia has come out with assessments of North Korea's missile launches that wildly diverge from the global consensus. Unlike the U.S., which uses a mix of satellites and ground-based radars, Russia only uses radars to detect incoming launches.

The U.S.'s monitoring system provides the U.S. as much as 20-30 minutes to detect missile activity and to determine a response. Russia's system, meanwhile, provides only a few minutes for determining whether the streaks across its radar screens constitute unarmed interceptors or nuclear-armed ICBMs.

Russia's missile detection difficulties are well-documented. M. Elaine Bunn, the Deputy Assistant Secretary of Defense for Nuclear and Missile Defense Policy, wrote in 2004 that the US needed to consider how to notify Russia of interceptor missiles launches during a crisis given “the possibility for Russian misidentification of a GMD or Aegis interceptor launch.”

However, since Bunn's suggestion in 2004, U.S. and Russian lines of communication and deconfliction have only suffered.

With little communication or cooperation between the U.S. and Russia about missile launches, Lewis warns that an attempt at intercepting a North Korean nuclear attack could spook the Russians so bad that they respond with a full-on nuclear attack that would leave much of the U.S. reduced to ashes.