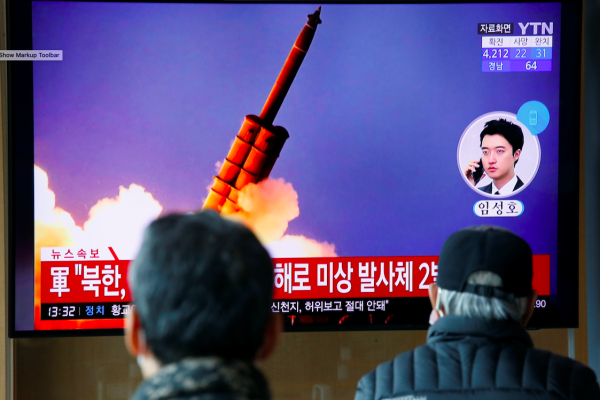 The missiles were launched from the eastern coastal city of Wonsan and flew 240 km (149 miles) and reached 35 km in altitude, South Korea's Joint Chiefs of Staff (JCS) said. North Korea has launched a series of missiles from the area in the past.

The North appears to be continuing a firing drill that leader Kim Jong Un oversaw last Friday, the JCS said, adding that the South was monitoring for potential additional launches.

Monday's launch was the first since North Korea fired what it called “super-large multiple rocket launchers” on Nov. 28.

“The ministers expressed strong concern over North Korea's resumption of short-range missile launches in three months,” the Blue House said in a statement. “Such actions are unhelpful for efforts to ease tensions on the Korean peninsula and they urged North Korea to stop them.”

Kim Dong-yub, a former South Korean Navy officer who teaches at Kyungnam University in Seoul, said the test “was likely to show off their self-defense capabilities to their people to shore up Kim's campaign for economic development while boosting military morale.”

South Korea and the United States indefinitely decided to postpone joint military drills amid a growing coronavirus outbreak in South Korea that has now infected soldiers from both countries.