"It's kind of creepy that there haven't been any statements from high level (North Korea) Foreign Ministry officials this week." 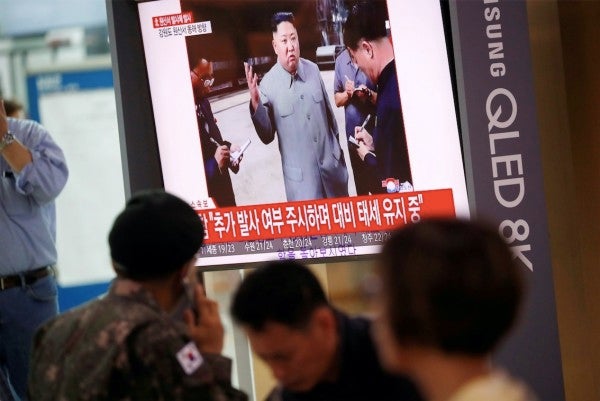 SEOUL (Reuters) – A last minute flurry of diplomacy aimed at engaging with North Korea ahead of its declared year-end deadline for talks has been met with stony silence from Pyongyang so far, with the looming crisis expected to top the agenda at summits in China next week.

The U.S. special envoy for North Korea, Stephen Biegun, was due to leave Beijing on Friday after meeting with Chinese officials. Earlier in the week, Biegun also made stops in Seoul and Tokyo for discussions with counterparts.

It is unclear if Biegun had any behind-the-scenes contact with North Korean officials, but his overtures and calls for new talks were not publicly answered by Pyongyang.

Biegun's trip came as China and Russia teamed up this week to propose a resolution that would ease some United Nations Security Council sanctions on North Korea as a way to jumpstart talks.

Next week, Chinese, South Korean and Japanese leaders are due to meet in China, with North Korea likely to top the agenda.

“It's kind of creepy that there haven't been any statements from high level (North Korea) Foreign Ministry officials this week…,” Jenny Town, managing editor at the North Korea monitoring website 38 North, said on Twitter. “The silence, even after Biegun's speech in Seoul, makes me concerned.”

North Korean leader Kim Jong Un has given the United States until the end of the year to propose new concessions in talks over North Korea's nuclear arsenal and reducing tensions between the long-time adversaries.

North Korea has said it is up to the United States to decide what “Christmas gift” it will receive this year, without specifying what Kim's decision may be.

The prospect that 2020 may see a return to heightened tensions and major missile or weapons tests by North Korea has led politicians, diplomats, and analysts around the world to debate how to salvage diplomacy after U.S. President Donald Trump's unprecedented summits with Kim over the past two years failed to make a breakthrough.

On Wednesday, four leading Democrats in the U.S. Senate wrote a letter to Trump arguing that U.S. efforts to establish peace on the peninsula and denuclearize North Korea “appear to be stalled and on the brink of failure”.

“We reiterate our hope that you will execute a serious diplomatic plan before it is too late,” the letter said.

The Senate Democrats' letter called for the administration to seek an interim agreement to freeze and roll back some of North Korea's nuclear weapons and ballistic missile programmes in conjunction with reduced pressure from sanctions.

“While such an agreement would of course only be a first step in a longer process, it would nonetheless be an important effort to create the sort of real and durable diplomatic process that is necessary,” they wrote.

China and Russia on Monday introduced a joint proposal that calls on the U.N. Security Council to lift some sanctions on exports and foreign workers, with Chinese officials calling it the “the best plan in the current situation to resolve the stalemate”.

The United States has said it is opposed to any sanctions relief at the moment, but has also said it is willing to be flexible in discussions.

Meanwhile, analysts at the Foundation for Defense of Democracies, a Washington-based think tank that has often advocated for a hard line against countries such as North Korea and Iran, called for the Trump administration to turn to implement a “maximum pressure 2.0” campaign.

The United States should increase sanctions, target North Korea with offensive cyber operations, and carry out an “aggressive” information campaign against the country, the foundation wrote in a report earlier in December.

The report for Korea Peace Now! called for lifting all sanctions that may be violating international law or undermining human rights, and to “urgently” try to mitigate the impact on humanitarian efforts.

Earlier this month, Trump angered North Korean officials by suggesting the United States could use military force “if we have to.”

Those remarks led North Korea's army chief to warn that North Korea would take “prompt corresponding actions at any level.”

North Korea launched several dozen short-range missiles in 2019, and the commander of U.S. air forces in the Pacific said this week that he suspects “some kind of long-range missile” could be North Korea's “Christmas gift.”

Speaking to reporters in Washington on Tuesday, Gen. Charles Brown said the U.S. military could “dust off pretty quickly and be ready to use” options it had developed during the height of tensions in 2017.

“If the diplomatic efforts kind of fall apart, we've got to be ready…we're already thinking ahead,” he said.