North Korea Stands Down On Threat To Guam 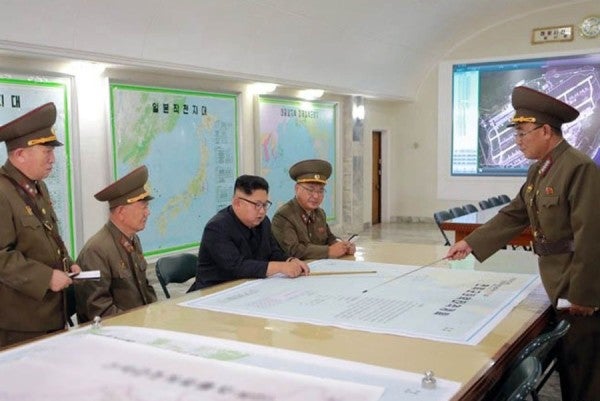 North Korea’s autocratic ruler has decided not to launch a threatened missile attack on Guam, Pyongyang’s state media reported Tuesday, easing the immediate threat of an attack on the U.S. territory in the western Pacific.

The North Korean statement said Kim Jong Un could change his mind “if the Yankees persist in their extremely dangerous reckless actions.”

The announcement appeared shortly after Defense Secretary James N. Mattis warned that an attack could quickly escalate to war, although it’s unclear if they were linked.

“If they fire at the United States it could escalate into war very quickly,” Mattis told reporters at the Pentagon. “That’s called war, if they shoot at us. … You don’t shoot at people in this world unless you want to bear the consequences.”

“It’s not declaring war — it’s not that I’m over here, Dr. Strangelove, doing things like that,” he said.

North Korea tested an intercontinental ballistic missile last month for the first time, and U.S. intelligence agencies assess that Pyongyang can build a nuclear warhead small enough to fit atop a long-range missile, although it’s not clear if it can target U.S. cities.

The latest missile tests led to a sharp rise in tensions. The United Nations Security Council voted unanimously to add new sanctions on North Korea, and President Donald Trump warned he would unleash “fire and fury” if Pyongyang continued its threats.

In response, North Korea said Kim was reviewing a plan to fire four midrange missiles over Japan and into international waters at least 20 miles off Guam, where the U.S. military operates several major bases.

Mattis was ambiguous as to how Washington would respond if Pyongyang launched a missile toward Guam as a show of force, and it landed far offshore.

“War is up to the president, and perhaps up to Congress,” Mattis said. “The bottom line is we will defend the country from attack.”

The U.S. military would be able to determine if a North Korean missile is headed toward Guam “within moments,” he said, because of spy satellites, radars and other high-tech sensors that track missile launches.

If necessary, “we’ll take it out,” Mattis said, suggesting the U.S. military would attempt to shoot it down with anti-missile interceptors on land and ships.

Earlier, Mattis and Secretary of State Rex Tillerson sought to defuse tensions in a Wall Street Journal opinion piece that said the Trump administration did not seek “regime change or accelerated reunification of Korea,” issues of special concern to China, which supports Pyongyang.

Gen. Joseph F. Dunford Jr., chairman of the Joint Chiefs of Staff, arrived late Monday in Beijing to meet with Chinese military leaders. Earlier, he met with South Korean President Moon Jae-in at Osan Air Base, a U.S. Air Force base about 40 miles south of Seoul.

Dunford said in Beijing that his goal was to “continue to develop our military-to-military relationships, to mitigate the risk of miscalculation in the region and to have cooperation where those opportunities exist,” according to a Pentagon statement.