North Korea and South Korea sent 20 diplomats to the “truce village” on Tuesday, where the two states, technically still at... 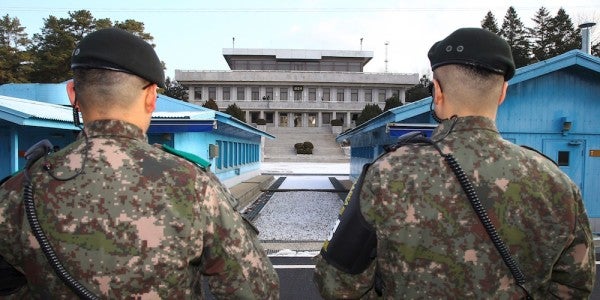 North Korea and South Korea sent 20 diplomats to the “truce village” on Tuesday, where the two states, technically still at war since 1953, talked about the coming Winter Olympics.

But early indications show that rising nuclear tensions remained the elephant in the room.

“This winter has seen more snowstorms than ever, and rivers and mountains across the country are frozen,” Ri Son Gwon, the chairman of the North's Committee for the Peaceful Reunification of the Fatherland, said to open the discussion, according to Reuters.

“It would not be an exaggeration to say that inter-Korean ties were even more frozen, but public yearning for improved relations was so strong that today’s precious event was brought about,” he said.

He also expressed “high hopes” for the dialogue and promised an “invaluable result as the first present of the year” to South Korea.

All eyes on Panmunjom

South Korea's Unification Minister Cho Myung-Gyun (right) shakes hands with North Korean chief delegate Ri Son-Gwon (left) as they exchange joint statements during their meeting at the border truce village of Panmunjom in the Demilitarized Zone (DMZ) dividing the two Koreas on January 9, 2018. North Korea will send its athletes to the Winter Olympics in the South, the rivals said on January after their first formal talks in more than two years following high tensions over Pyongyang's nuclear weapons programAFP/Getty Images

In Panmunjom, the village in the demilitarized zone separating the two Koreas where an armistice halted fighting in the Korean War, diplomats from the two countries labored while microphones and cameras recorded their every word and move.

Both South Korean President Moon Jae In and North Korean leader Kim Jong Un had access to live streams of the discussions, but no special message was made to either leader, according to reports.

While many have maligned the talks as a North Korean attempt to drive a wedge between the U.S. and South Korea, the talks resulted in a few tangible results on their first day.

Even better, the highest-level talks between the countries since 2015 did not just focus on the Olympic Games but veered into other important inter-Korean relations, as President Donald Trump and many others hoped they would:

Additional discussion took place around whether North Koreans could march with South Koreans in the ceremonies around the games and whether families separated by the DMZ could be reunited.

In the short term, South Korea's Winter Olympics seems to have gained a massive vote of confidence from its often troublesome neighbor.

The presence of North Korean performers, athletes, and citizens at the games all but guarantees that the games will go over without a hitch from Pyongyang.

In the longer term, the situation remains fraught. The US still rejects North Korea's status as a de facto nuclear nation and refuses to talk without the precondition that Pyongyang must denuclearize.

But the talks have reversed the momentum of a spiraling series of nuclear threats and military escalations.

“Washington should build on what has happened so far to signal to Kim that the diplomatic door is being cracked open,” Joel Wit and Robert Carlin, two former State Department officials with experience with North Korea, wrote in The Atlantic.

Despite the risk that North Korea may be trying to trick the US and South Korea or stall until it can perfect its nuclear arsenal, there are few opportunities for dialogue and even greater risks involved with not talking.