North Korea is on an “aggressive schedule” to build and deploy its first operational ballistic-missile submarine, a U.S. think tank... 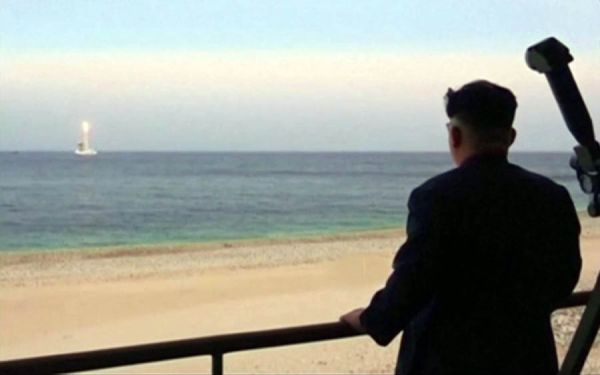 The report by 38 North, a website run by the U.S.-Korea Institute at Johns Hopkins University, suggests that the North is making progress in developing submarine-launched ballistic missiles in addition to its land-based nuclear weapons program.

Images from Nov. 5 showed parts being moved into and out of areas near constructions halls, indicating a shipbuilding program is in progress at the Sinpo base on North Korea’s east coast.

38 North pointed to two large circular objects in a yard that could be parts of a submarine’s pressure hull. It said their presence “suggests construction of a new submarine.”

The findings, which were posted on the website Thursday, also noted a probable launch canister at the missile test stand, suggesting ongoing ejection testing.

“Such testing could support the continued development of SLBMs, a new ballistic missile submarine or a combination of both,” defense expert Joseph Bermudez said in his analysis.

It also would be consistent with a CNN report in August saying the U.S. military has detected “highly unusual and unprecedented levels” of North Korean submarine activity.

CNN quoted an unnamed U.S. defense official as saying there was evidence of an ejection test — which evaluates the “cold-launch system” that propels the missile from the launch canister before its engines ignite — in August.

The development of a submarine able to launch a long-range missile would be significant because it would be harder to detect and better able to maneuver in international waters than land-based systems.

In August 2016, North Korea successfully test-fired an SLBM that flew about 310 miles from Sinpo toward Japan before crashing into the sea.

It was fired at a high angle to avoid Japanese territory, and military officials said it could have traveled twice as far on a normal trajectory. North Korea’s state-run media said the test showed the United States was “within striking range.”

U.S. and South Korean military officials have been on alert for signs that the communist state may conduct another missile test after a more than two-month lull in activity.

38 North said a prototype submarine and submersible missile test stand barge appear ready to be put to sea at any time, but it stressed that “there are no activities suggesting” a test was imminent.

Tensions are high over traded threats between the North and President Donald Trump, who has threatened to “totally destroy” the country if forced to defend the U.S. and its allies.

North Korea raised alarm over the summer when it test-fired two intercontinental ballistic missiles and sent two other projectiles soaring over the Japanese island of Hokkaido.

Pyongyang also conducted its sixth and most powerful nuclear test on Sept. 3.