As President Donald Trump touted a new era of diplomacy with the North Korean regime, a classified intelligence assessment appeared... 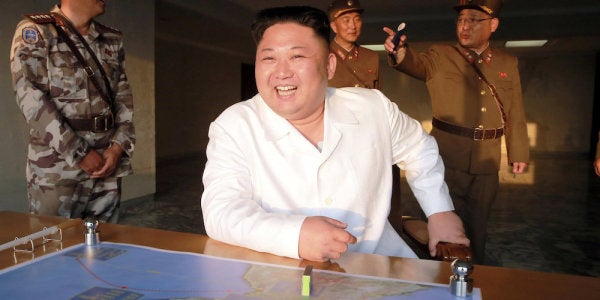 As President Donald Trump touted a new era of diplomacy with the North Korean regime, a classified intelligence assessment appeared to tell a different story, according to several U.S. intelligence officials.

The assessment revealed that, in recent months, North Korea had upped its production of fuel for nuclear weapons at several secret sites, according to over a dozen intelligence officials cited in an NBC News report published Friday. The officials said they believe North Korean leader Kim Jong Un may be trying to conceal the secret facilities from the US.

Related: What If The Trump-Kim Summit Wasn’t Really About Nuclear Disarmament? »

According to five US officials cited by NBC News, the North Korean regime was increasing production of enriched uranium, even as relations with the US improved following the 2018 Winter Olympics. And since the leaders of both countries held a summit in Singapore in mid-June, the Trump administration has already delivered some concessions to the North.

Trump halted Ulchi Freedom Guardian, a major joint military drill with South Korea that was scheduled for August. The military exercises have been a point of contention for North Korea, which sees them as a direct threat. The US and South Korea treat the drills as defensive measures.

During the U.S.-North Korea summit, the first such meeting between a sitting US president and a North Korean leader, the two men pledged to “work toward complete denuclearization of the Korean Peninsula.” It was a vast departure from 2017. when both Trump and Kim were openly threatening nuclear war. But the broad and nondescript document fell short of a specific plan or goal and was criticized by foreign-policy experts.

And though North Korea took several steps to indicate it was in the process of dismantling its weapons program, such as blowing up tunnels leading to a nuclear test site, critics who monitored the development say it may have all been for show.

“There are lots of things that we know that North Korea has tried to hide from us for a long time,” another intelligence official added.

The intelligence report may also confirm the theory held by many arms experts: that North Korea possesses a second, undisclosed nuclear enrichment facility. In 2008, North Korea signaled it would curb its nuclear program by televising the destruction of a water-cooling tower at a plutonium extraction facility, only to announce that it would “readjust and restart” in 2013.

The report also calls into question Trump's claim that North Korea no longer poses as a nuclear threat to the US: “There is no longer a Nuclear Threat from North Korea,” Trump tweeted in June, after returning from his meeting with Kim. “Meeting with Kim Jong Un was an interesting and very positive experience. North Korea has great potential for the future!”

“I'm confident what [Trump] intended there was, 'we did reduce the threat,'” Pompeo said during a Senate hearing on Wednesday. “I don't think there's any doubt about that.”