North Korea on Sept. 25 said it interpreted a tweet from President Donald Trump as a declaration of war and threatened to... 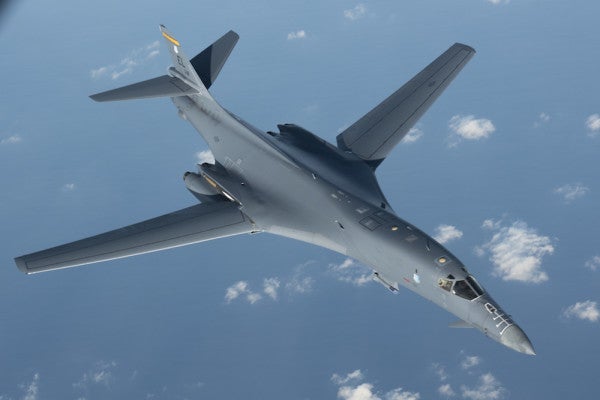 North Korea on Sept. 25 said it interpreted a tweet from President Donald Trump as a declaration of war and threatened to shoot down U.S. B-1B Lancer strategic bombers even if they weren't flying in its airspace — but such an attack is easier said than done.

Fighter jets from South Korea and Japan often accompany the bomber, and sometimes they drop dummy bombs on a practice range near North Korea's border.

The move infuriates North Korea, which lacks the air power to make a similar display. North Korea previously discussed firing missiles at Guam, where the U.S. bases many of the bombers, and it has now discussed shooting one down in international airspace.

On Sept. 26, South Korean media reported that North Korea had been reshuffling its defenses, perhaps preparing to make good on its latest threat.

But the age of the country's air defenses complicates that task.

Lamrani said North Korea had a few variants of older Soviet-made jets and some “knockoff” Soviet air defenses, such as the KN-06 surface-to-air missile battery that mimics Russia's S-300 system.

From the ground, North Korea's defenses are “not really a threat to high-flying aircraft, especially if you're flying over water,” Lamrani said.

But North Korea does have one advantage: surprise.

This image of North Korean leader Kim Jong Un watching a launch was released by the Korean Central News Agency a day after Pyongyang test-fired a missile over Japan on Friday, Sept. 15, 2017.Courtesy of KCNA

When aircraft enter or come close to protected airspace, intercepts are common. Very often, military planes will fly near a group of jets and tell them they are entering or have entered guarded airspace and that they should turn back or else.

Though the U.S., South Korea, and Japan all have advanced jets that could easily shoot down an approaching North Korean jet before it got close enough to strike, the U.S. and North Korea are observing a cease-fire and are not actively at war. Therefore, a North Korean jet could fly right up to a U.S. bomber or fighter and take a close-range shot with a rudimentary weapon that would have a good chance of landing.

North Korea would have “the first-mover advantage,” Lamrani said, but if the North Korean aircraft shot down the U.S.'s, “they would pay a heavy price.”

For that reason, Lamrani said he found the scenario unlikely. The last time the U.S. flew B-1s near North Korea, four advanced jet fighters accompanied it. North Korea's air force is old and can't train often because of fuel constraints, according to Lamrani. The U.S. or its allies would quickly return the favor and destroy any offending North Korean planes.

At this point, even North Korea must be aware it's largely outclassed by the U.S. and allied air forces, and that taking them on would be a “suicide mission,” Lamrani said.