North Korea's foreign minister called President Donald Trump's comments at the UN General Assembly a clear “declaration of war” that would lead the... 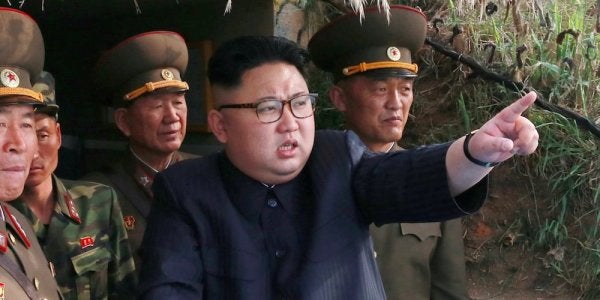 North Korea's foreign minister called President Donald Trump's comments at the UN General Assembly a clear “declaration of war” that would lead the country to try to shoot down U.S. strategic bombers even if they're not in North Korea's airspace, according to the BBC.

North Korea Foreign Minister Ri Yong Ho spoke with reporters in New York, saying, “The whole world should clearly remember it was the U.S. who first declared war on our country.”

“Since the United States declared war on our country, we will have every right to take countermeasures, including the right to shoot down United States strategic bombers even when they are not inside the airspace border of our country,” Ri said.

NEW: Foreign Minister of North Korea: “Trump has declared war on North Korea;” claims country has a right to shoot down US bombers pic.twitter.com/l5B8rKK3FZ

The statement referred to Trump telling the UN that if the U.S. is “forced to defend itself or its allies, we will have no choice but to totally destroy North Korea.”

Trump said in the same speech that Kim Jong Un, North Korea's leader, was a “rocket man” who was “on a suicide mission for himself and for his regime.”

“If Trump thinks that he would bring North Korea, a nuclear power, to its knees through nuclear war threat, it is a big miscalculation and ignorance,” read North Korea's statement.

Trump and Kim have been locked in a war of words since Trump threatened to respond to further North Korean provocations with “fire and fury” in mid-August.

Trump also specifically threatened Ri on Twitter, suggesting he “won't be around much longer” if he continues on a path of escalation with the US.

However, the U.S. and North Korea are still technically at war, as the 1953 conflict ended in a ceasefire. It's unclear what exactly the government means by saying Trump declared war anew.

Additionally, the B-1B bomber recently flown off North Korea's coast by the U.S. Air Force is a supersonic aircraft, and it's unclear if Pyongyang has any capacity to down such an advanced jet.

Pyongyang has also recently threatened to fire a salvo of missiles at Guam, a U.S. territory in the Pacific, and to fire a nuclear-tipped missile into the Pacific ocean. Both threats have gone unfilled.