Top Navy admiral: North Korea unlikely to give up all nuclear weapons

Weeks before a second summit between U.S. President Donald Trump and North Korean leader Kim Jong Un, the top U.S. military commander for Asia on Tuesday echoed an intelligence assessment that North Korea is unlikely to give up all its nuclear weapons 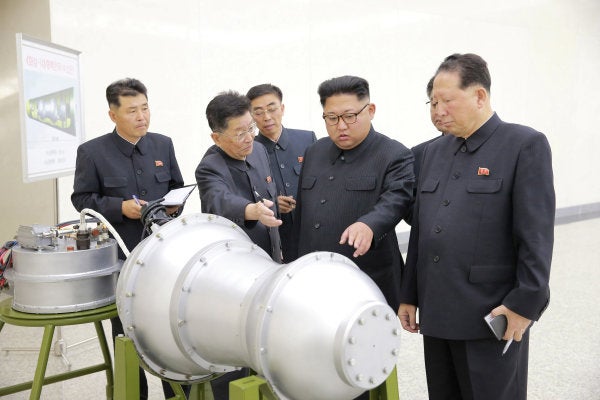 WASHINGTON (Reuters) – Weeks before a second summit between U.S. President Donald Trump and North Korean leader Kim Jong Un, the top U.S. military commander for Asia on Tuesday echoed an intelligence assessment that North Korea is unlikely to give up all its nuclear weapons.

Although he expressed optimism about the Feb. 27-28 Hanoi summit in verbal testimony to the Senate Armed Services Committee, Admiral Philip Davidson, head of the Indo-Pacific Command, expressed doubts about North Korean intentions in his written submission to the panel.

“USINDOPACOM's assessment on North Korean denuclearization is consistent with the Intelligence Community position. That is, we think it is unlikely that North Korea will give up all of its nuclear weapons or production capabilities, but seeks to negotiate partial denuclearization in exchange for U.S. and international concessions,” he said.

Last month, U.S. Director of National Intelligence Dan Coats told Congress he believed it was unlikely North Korea would give up all its nuclear weapons and that it had continued activity inconsistent with pledges to denuclearize.

Trump has been eager for a second summit with Kim even though their first meeting in Singapore in June produced only vague commitments from Kim and little concrete progress since.

While Trump has cited North Korea halting its nuclear testing and no new missile launches in 15 months as proof of progress, a report by U.N. sanctions monitors has also cast doubt on Pyongyang's intentions.

Pyongyang “is using civilian facilities, including airports, for ballistic missile assembly and testing with the goal of effectively preventing 'decapitation' strikes” on a smaller number of identified nuclear and missile assembly and manufacturing sites,” the U.N. report said.

The White House declined comment on Davidson's remarks. A State Department spokeswoman said it remained confident the Singapore summit commitments would be fulfilled, and added: “It is Chairman Kim's commitment to denuclearization upon which the world is focused.”

'Much needs to be done'

Davidson said tensions with North Korea had declined since it halted nuclear and missile testing in 2017 and that it had taken some denuclearization steps, most notably the destruction of tunnels at it nuclear test site.

However, he said that action was reversible and added: “Much needs to be done to make meaningful progress.”

Davidson also noted that North Korea had demanded “corresponding” U.S. steps and that Kim had warned in a New Year speech of a potential “new path,” which could indicate an eventual return to weapons testing, if he was not satisfied with the negotiations.

Kim pledged in Singapore to work toward denuclearization of the Korean peninsula and in September expressed willingness to permanently dismantle facilities at his country's main nuclear site of Yongbyon – in return for corresponding U.S. moves.

U.S. Special Representative for North Korea Stephen Biegun held three days of talks in Pyongyang last week to prepare for the second summit, which he said would include discussion of such corresponding steps.

South Korean media said Biegun told a South Korean parliamentary delegation visiting Washington that in Pyongyang the two sides agree not to negotiate, but to make clear their respective positions.

Yonhap news agency said members of the parliamentary delegation quoted Biegun as saying that while there had been agreement on the summit agenda, the two sides would seek to narrow their differences in the next round of talks.

“With only two weeks until the summit, it will be difficult to resolve all the tricky issues, but there's a chance if we can agree on a timeline (for denuclearization),” a South Korean delegation member quoted Biegun as saying.

Yonhap quoted South Korea's presidential office as saying that Biegun planned to meet the North Koreans again in an Asian country next week.

U.S. Secretary of State Mike Pompeo said during a visit to Slovakia on Tuesday he hoped for “substantial progress” in Hanoi.

In talks with the United States, North Korea has been seeking a lifting of punishing U.S.-led sanctions, a formal end to the 1950-53 Korean War, and security guarantees.

A Stanford University study released on Tuesday said North Korea had continued to produce bomb fuel while in talks with the United States and may have produced enough in the past year to add as many as seven nuclear weapons to its arsenal.

However, it said North Korea's freeze in nuclear and missile testing since 2017 mean its weapons program probably poses less of a threat than it did at the end of that year.

WATCH NEXT: North Korea Fires 'Most Powerful' ICBM Yet