President Trump said Friday that he hopes to eventually withdraw U.S. troops from South Korea but would not use a... 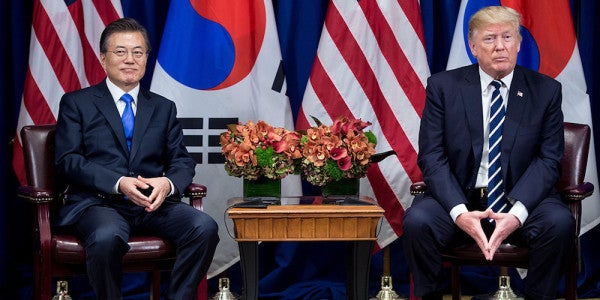 President Trump said Friday that he hopes to eventually withdraw U.S. troops from South Korea but would not use a pullout as a bargaining chip when he meets with North Korea's leader Kim Jong Un seeking a deal to curb Pyongyang's nuclear weapons.

“At some point into the future, I would like to save the money” it costs to keep up to 32,000 American troops in South Korea, Trump told reporters on Air Force One. He added that a withdrawal will not be on the table at the first planned U.S.-North Korean summit after more than six decades of hostility.

U.S. and North Korean officials have agreed on a date and location for the nuclear summit, Trump said, promising to announce the details shortly. The White House said South Korean President Moon Jae-in will visit the White House on May 22, so the summit is unlikely before then.

Trump's vow not to immediately offer a U.S. withdrawal, a long-standing demand by Pyongyang, may be aimed at easing concerns among his military advisors and U.S. allies in the region that, in his eagerness for a deal, Trump would bargain away a cornerstone of U.S. security strategy in northeast Asia.

But Trump only added to the uncertainty Friday by repeating his previous vows to bring at least some U.S. troops home from South Korea because he considers the deployment a costly waste. His comments came after weeks of conflicting signals from administration officials, including reports that Trump's aides had to talk him out of ordering a major withdrawal from Korea.

The topic is so sensitive that John Bolton, Trump's national security advisor, denounced as “utter nonsense” a New York Times story Friday that said Trump had asked the Pentagon for withdrawal options.

Like Trump, Pentagon officials have given conflicting statements about a possible drawdown of U.S. troops from the region.

Defense Secretary James N. Mattis said last week that troop levels “was one of the issues we'll be discussing” with allies and with Pyongyang if North and South Korea sign a peace treaty to formally end the Korean War, which halted in 1953 with a tense cease-fire.

In a statement Friday, Lt. Col Christopher B. Logan, a Pentagon spokesman, said the mission in South Korea “remains the same and our force posture has not changed.” He said the Defense Department is “developing and maintaining military options for the president, and reinforcing our ironclad security commitment with our allies. We all remain committed to complete, verifiable and irreversible denuclearization of the Korean Peninsula.”

The U.S. has stationed troops in South Korea since the Korean War. Together with major U.S. air and Navy bases in Japan, the Pentagon keeps a massive military presence in northeast Asia to support a defense treaty that requires the United States to come to South Korea's aid if it is attacked.

South Korean officials also have dismissed the idea that U.S. troops would be removed. A spokesman for President Moon told reporters Wednesday in Seoul that Moon considered U.S. troops “a matter of the South Korea-U.S. alliance” that “has nothing to do with signing a peace treaty” with Pyongyang.

Over the decades Washington has gradually shifted the cost of keeping troops onto the government in Seoul. South Korea now pays more than $890 million a year, about half the annual cost for the deployment, not including personnel costs that the Defense Department would have to pay no matter where the troops were located.

Trump has insisted repeatedly, and inaccurately, that Japan and other U.S. allies contribute little or nothing to the United States for their own defense.

Advocates for reducing the U.S. presence in South Korea argue that if the threat from North Korea diminishes, so would the need for keeping large number of U.S. troops on the peninsula.

“The U.S. posture on the peninsula can be adjusted according to the threat South Korea perceives from North Korea,” said Abraham Denmark, a former senior Pentagon official responsible for Asia. “That's different than it being a bargaining chip.”

Opponents argue that U.S. troops will be required for years to deter a conventional attack by North Korea even in the unlikely event it agrees to eliminate or reduce its nuclear and missile stockpiles after the Trump-Kim summit.

North Korea has more than 1.2 million troops, a massive if increasingly obsolete ground force that poses a direct threat to Seoul, only 35 miles from the demilitarized zone dividing north and south, if hostilities broke out.

Any reductions in the size of North Korea's armed forces are likely to occur over years — as would any withdrawals of U.S. troops, officials said.

Unlike his father and grandfather, who previously ruled North Korea, Kim has not made a withdrawal of U.S. troops from South Korea a priority and may not demand it at the summit, analysts say.

“I don't think he would object to having them leave, but I'm not sure he would push for that, either,” said Gi-Wook Shin, director of Stanford University's Walter H. Shorenstein Asia-Pacific Research Center.

The U.S. troops give Kim leverage with China, which sees North Korea as a buffer state between its border and a well-armed U.S. ally. A U.S. withdrawal could lessen North Korea's importance to Beijing, costing it economic aid and other support.

Pentagon officials view U.S. bases in Korea and Japan as key to the regional contest for influence with an increasingly assertive China. It's another reason they are likely to resist any push by Trump to withdraw unilaterally.

Despite Trump's complaints, the Pentagon shows every sign of wanting to stay indefinitely in South Korea.

Last year, U.S. commanders began moving troops from bases in downtown Seoul and near the Demilitarized Zone along the border with North Korea to Camp Humphreys, an expansive military base that houses more than 10,000 American soldiers about 40 miles south of Seoul.

Construction of the base cost an estimated $10.8 billion. The South Korean government paid nearly the entire tab.

Leaving Seoul is meant to reduce friction between U.S. troops and Koreans in the country's biggest city, while pulling back from the demilitarized zone is intended to get large number of U.S. troops out of range of North Korean artillery.

But even some South Korean officials expect demands will intensify for American soldiers to go home if North and South Korea sign a peace treaty and relations improve.

“It will be difficult to justify their continuing presence in South Korea,” Chung-in Moon, a special advisor to President Moon, wrote in Foreign Affairs this week.

The uncertainty comes at a sensitive time. In March, U.S. and South Korean diplomats began negotiating an extension of the agreement specifying how much Seoul will pay toward the costs of keeping U.S. forces in South Korea.

U.S. officials are expected to press Seoul to hike its contributions in the next four-year agreement. But the deal has to be approved by the South Korean parliament, where many legislators may be reluctant to pay more when they are seeking warmer ties with Pyongyang.

Most of the money stays in South Korea, paying for local labor, rent, utilities and the construction of barracks and other military facilities.