North Korean leader Kim Jong Un declared that his country is no longer bound by its self-imposed moratorium on nuclear and intercontinental ballistic missile (ICBM) tests, while also warning of a "new strategic weapon" that he vowed to soon reveal to the world, state-run media reported Wednesday 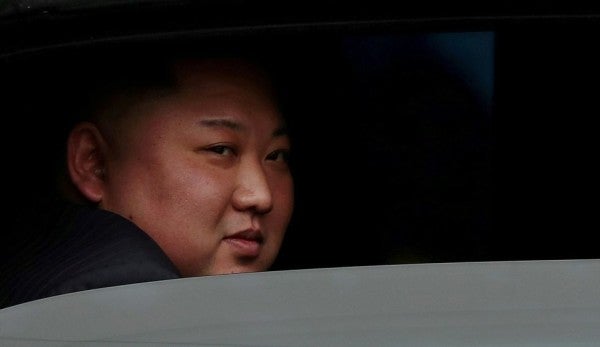 North Korean leader Kim Jong Un declared that his country is no longer bound by its self-imposed moratorium on nuclear and intercontinental ballistic missile (ICBM) tests, while also warning of a “new strategic weapon” that he vowed to soon reveal to the world, state-run media reported Wednesday.

“There is no ground for us to get unilaterally bound to the commitment any longer,” Kim said of the moratorium during a meeting of top ruling party officials, the North's official Korean Central News Agency reported.

Kim accused the administration of U.S. President Donald Trump of dragging its feet in nuclear negotiations, warning that the nuclear-armed North will soon show off “a new strategic weapon” as it continues to build up its nuclear deterrent in the face of “gangster-like” U.S. sanctions and pressure.

The North Korean leader made the comments during the fourth and final day of a meeting of the powerful Central Committee of the ruling Workers' Party on Tuesday, where Kim declared that Pyongyang will never trade its security for promised economic benefits in the face of what he said was growing U.S. hostility and nuclear threats.

His remarks came amid a monthslong standoff between Washington and Pyongyang over disagreements involving disarmament steps and the easing of crushing U.S. and United Nations sanctions imposed on the North.

“The U.S. is raising demands contrary to the fundamental interests of our state and is adopting (a) brigandish attitude,” KCNA quoted him as saying.

In his sole allusion to Trump in the speech, Kim said Washington had “conducted tens of big and small joint military drills which its president personally promised to stop” and sent high-tech military equipment to the South and piled further sanctions on the North.

“He said that we will never allow the impudent U.S. to abuse the DPRK-U.S. dialogue for meeting its sordid aim but will shift to a shocking actual action to make it pay for the pains sustained by our people so far and for the development so far restrained,” KCNA reported, using the acronym for the North's formal name, the Democratic People's Republic of Korea.

Kim added that “if the U.S. persists in its hostile policy toward the DPRK, there will never be the denuclearization on the Korean Peninsula and the DPRK will steadily develop necessary and prerequisite strategic weapons for the security of the state until the U.S. rolls back its hostile policy.”

Van Jackson, a lecturer at Victoria University of Wellington and former Pentagon official, said that the speech allowed Kim the breathing room to test more threatening weapons in its quest for sanctions relief.

“Kim has rhetorically freed himself to pursue any kind of research and weapons testing he wants,” Jackson said. “That will be provocative, and North Korea will accentuate or play up the threatening nature of the tests if it serves its purpose.”

Still, despite the harsh rhetoric, Kim gave no clear indication of an imminent resumption of nuclear or ICBM tests, and even appeared to leave the door open for eventual negotiations, saying that “the scope and depth of bolstering our deterrent will be properly coordinated depending on the U.S. future attitude.”

Negotiations between the two sides have been at loggerheads since the breakup of their Hanoi summit last February, after which the North set an end-of-year deadline for the U.S. to offer fresh concessions on sanctions relief, issuing a veiled threat that it would take a “new path” if Washington failed to meet its demands.

It is unclear what a new path could mean, but analysts have speculated it could come in the form of a satellite launch or test of a solid-fueled ICBM, possibly over Japan.

“In a way, North Korea has been forced to show its hand after playing a risky game of poker in 2019,” said Mintaro Oba, a former U.S. State Department official who worked on North Korean issues.

“The end-of-year deadline it imposed could've led to a much more definitive North Korean posture, but instead the language Kim used was extremely careful and very conditioned on U.S. actions,” he said. “At a moment when North Korea could have closed the door much more firmly on engagement with the United States and more clearly spelled out a return to high tension, it effectively showed us that it still has a stake in the diplomatic process.”

The North last tested a missile capable of striking the continental U.S. in November 2017. It has carried out six nuclear tests, including a detonation in 2017 of what it claimed was a hydrogen bomb.

Trump has repeatedly pointed to the moratorium as an example of progress his administration has made in reining in the North's nuclear ambitions. Observers, however, have said that Kim has continued to bolster his arsenal despite the halt to long-range and nuclear tests.

It is uncertain how Trump would respond to an actual test of a longer-range weapon, especially of one that puts the U.S. within range, but he has repeatedly touted Kim's “promise” not to carry them out, and has played down launches of shorter-range weapons that put Japan and South Korea at risk.

Trump, asked about Kim's remarks later Tuesday, struck an optimistic note, urging the North Korea leader to stick to what the U.S. president said was a promise to denuclearize. During their first of three meetings — in Singapore in June 2018 — the two issued a vague joint statement in which they agreed to work toward the “complete denuclearization of the Korean Peninsula” — without defining this or detailing when and how it would occur.

Experts have said that Kim is extremely unlikely to sign away his nuclear arsenal, which his country has called its “treasured sword,” but may be open to some kind of arms control agreement in exchange for relaxed sanctions.

“It's been clear what North Korea wanted all along, and it was sanctions relief, not the fuzzy peace and rainbows that many of us hoped for,” Jackson said. “So as long as we weren't willing to grant sanctions relief unilaterally, the current moment was inevitable.”

But even if such a deal fails to materialize, Kim has made clear that he is willing to live under international sanctions to preserve his country's nuclear capability — including in his latest speech.

“It is true that we urgently need (an) external environment favorable for the economic construction but we can never sell our dignity which we have so far defended as valuable as our own life, in hope for brilliant transformation,” Kim was quoted as saying.

The standoff between the two nuclear states, he added, was now one “between self-reliance and sanctions.”

Kim warned of a “long confrontation with the U.S.,” which he said “urgently requires us to make it a fait accompli that we have to live under the sanctions by the hostile forces in the future, too, and to strengthen the internal power from all aspects.”

Tuesday's speech at the Central Committee meeting had apparently replaced Kim's annual New Year's speech, observers said, in what would be the first time since taking power in 2011 that he had skipped the address. The North Korean leader has traditionally used the speech to review the past and set future goals — and detail any policy shifts.

Kim's remarks at the meeting followed months of intensified weapons testing and fiery statements issued by a slew of senior North Korean officials.

The North announced last month that it conducted two “crucial” tests at its long-range rocket launch site that would further strengthen its “nuclear deterrent,” prompting speculation that it was developing an ICBM or planning a satellite launch widely seen as a thinly veiled way of improving its missile technology.

The prolonged impasse has stoked concerns that it could trigger a return to the days of 2017, when the North tested its most powerful missiles and nuclear weapons and the two leaders exchanged barbs as Trump threatened to rain “fire and fury” on the North.

In an interview, U.S. Secretary of State Mike Pompeo said Tuesday that he hoped the North would choose peace over war.

“It remains the case that we hope that Chairman Kim will take a different course,” the top U.S. diplomat said when asked for his assessment of the warning in an interview with Fox News on Tuesday. “We're hopeful that Chairman Kim will make the right decision, (that) he'll choose peace and prosperity over conflict and war.