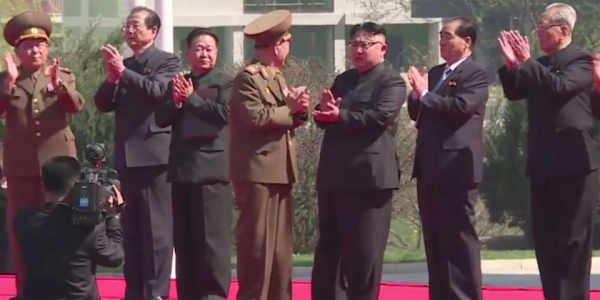 North Korea’s leader ordered frontline artillery forces to be prepared to “break the backbone” of enemy forces, showing defiance days before voters in the South choose a new president.

The move came as all sides have ratcheted up their rhetoric amid fears that rising tensions over the North’s nuclear weapons program may erupt into active conflict.

Kim inspected detachments on the Jangjae and Mu islands and examined a plan for the “newly organized forces” to strike enemy objects, KCNA reported.

“He said that the [North Korean army’s] elite artillery group defending the southwest front should keep highly alert to break the backbone of the enemy once ordered,” it added.

KCNA noted that Kim looked at South Korea’s Yeonpyeong Island from an observation post on Jangjae and received a report about recent “enemy movements” there.

He also sampled fresh water in a new facility that desalinates seawater and “was most pleased to see that the issue of drinking water for the soldiers on those islets has been completely solved,” it said.

The visit was highly symbolic since the islets are near Yeonpyeong Island, which was the site of a deadly North Korean artillery attack in 2010 – one of the most serious incidents between the two countries since the Korean War ended in 1953.

CIA director Mike Pompeo examined some of the damage from that strike during a visit to the island earlier this week.

The crisis with North Korea has emerged as a key issue in a snap presidential election in the South. Polls show Moon Jae-in, a left-leaning candidate who favors talks with the North, holds a strong lead.

Tuesday’s vote is being held early because the former president, Park Geun-hye, was ousted and jailed over a corruption and influence-peddling scandal.

A record number of people — nearly 20 percent of the electorate — took part in early voting on Thursday and Friday, suggesting the overall turnout will be high, the National Election Commission said.

President Donald Trump has signaled he will take a harder line toward the North, ordering several warships to the region in a show of military might in recent weeks.

But the administration also has said it will focus on exerting “maximum pressure” with increased diplomatic efforts and economic sanctions against Pyongyang.

U.S. lawmakers took a step in that direction Thursday when the Republican-led House voted to slap North Korea with new sanctions targeting its shipping industry and use of slave labor. The Senate must take up the measure next.