North Korea has again lobbed a vague year-end threat at the Trump administration, saying the United States can expect a "Christmas gift" if talks between U.S. and North Korean officials don't lead to substantive concessions for the latter 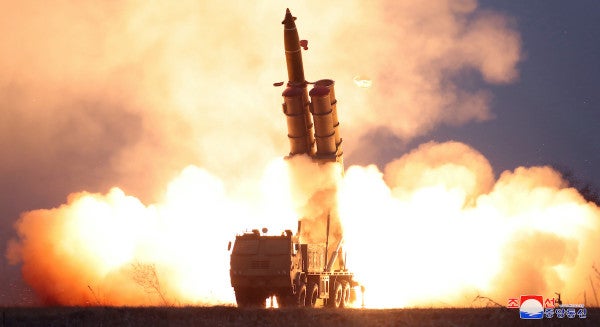 North Korea has again lobbed a vague year-end threat at the Trump administration, saying the United States can expect a “Christmas gift” if talks between U.S. and North Korean officials don't lead to substantive concessions for North Korea.

As the year-end deadline that the hermit kingdom has given the U.S. runs out, North Korea may renege on the only concession it has given President Donald Trump — the promise to abandon nuclear and long-range weapons testing.

In November, the Korean Central News Agency (KCNA), North Korea's state-run news outlet, released a statement saying that time was quickly running out for the U.S. to resume talks that had stalled after Trump's much-touted visit to the demilitarized zone (DMZ) in June. While U.S. diplomats have said that tentative negotiations in Stockholm last month went well, North Korea's latest missive indicates otherwise.

North Korea's Vice Foreign Minister of U.S. Affairs Ri Thae Song told KCNA that, “The DPRK has done its utmost with maximum perseverance not to backtrack from the important steps it has taken on its own initiative,” referring to its promise not to test ICBMs or nuclear weapons, but that the U.S. hasn't held up its end of the bargain — which, to North Korea, means sanctions relief.

As researcher Joshua Pollack of the James Martin Center for Nonproliferation Studies at Middlebury College (CNS) wrote on Twitter, North Korea has historically tested missiles between February and September. But the language of a “Christmas gift” echoes a July 2017 statement from North Korea's ministry of foreign affairs that referred to the launch of three ICBMs, all of which landed in the Pacific west of Japan.

“A 'Christmas gift' in the form of a test into the Pacific seems not out of the question,” Pollack wrote Tuesday.

“It's not implausible that they could give the world a Christmas or New Year gift of an ICBM test,” Vipin Narang, an associate professor of political science at MIT and a member of a member of MIT's Security Studies Program, told Insider.

“It's possible this is all aimed at generating pressure and leverage against Trump now, but by the same token, given the consistency and insistence on the deadline, and North Korea's history of doing what it says it is going to do… let's see what gift we get,” Narang said.

“North Korea is very careful with its words,” Shea Cotton, also a researcher at CNS, told Insider, indicating that it's no coincidence North Korea is again using the language of a threatening “gift.”

Should North Korea continue this pattern, the U.S. will have lost the only concession Trump managed to wrangle from the DPRK. But experts say that unless the U.S. is willing to take denuclearization off the table, North Korea will likely be testing ICBMs or intermediate-range ballistic missiles (IRBMs) in the near future — but this time, there may be a few new details, like an overflight of Japan instead of “lofting” its launches, solid-fueled missile launches, or a satellite launch, Cotton told Insider.

Tuesday's statement accused Trump of trying to stall ahead of the 2020 elections.

“The dialogue touted by the U.S. is, in essence, nothing but a foolish trick hatched to keep the DPRK bound to dialogue and use it in favor of the political situation and election in the U.S.,” Song said in the statement.

“It's possible they also see Trump as someone they're more likely to get a good deal with (compared to a more competent administration) and think he might not be around for much longer, given the looming impeachment and 2020 election,” Cotton told Insider.

“North Korea has a pretty sophisticated missile program,” he said. “They can probably test whenever they want more or less. If North Korea ends up not doing something like resuming testing it would only be because they found a reason not to, like the resumption of serious talks with the U.S.”