‘What do we do with it?’ — Norway ponders the fate of that mysterious ‘spy whale’

Is it a Russian spy? Is it a therapy animal? Is it just a runaway SeaWorld mammal finally free to take on the high seas? 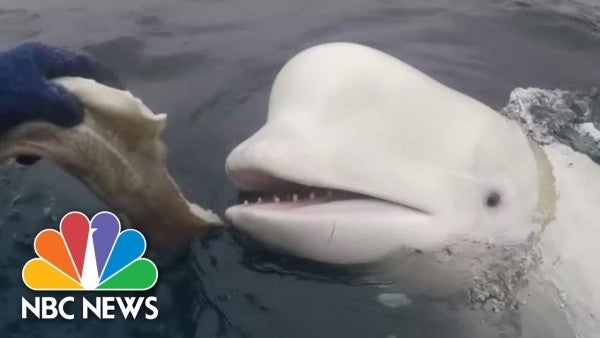 BERGEN, NORWAY — Is it a Russian spy? Is it a therapy animal? Is it just a runaway SeaWorld mammal finally free to take on the high seas?

These are the theories swirling after a happy-go-lucky Beluga was spotted on Norway's northern coastline in Tufjord over a week ago.

The whale, originally found wearing a harness with “Equipment St. Petersburg” printed on it, as well as a mounted camera, is not believed to be in the region for malign purposes, and has reportedly been spotted swimming up to Norwegian residents.

But Norwegians will now face a difficult decision: Do they foster the Beluga, or do they 'free willy'? (The whale has actually been nicknamed “Hvladimir” by the Scandinavian media).

“The concern is … what do we do with it? Because it's 'ours' now,” said a senior officer with the Royal Norwegian Navy, speaking on background.

Military.com spoke with officials here as part of a trip organized by the Atlantic Council, a Washington D.C.-based think tank. The officer provided remarks on background in order to speak freely on various subjects.

The officer, speaking from a Norwegian perspective, said he hopes an animal conservation organization comes to the defense of the whale, because it could endanger itself if it heads toward high-trafficked waterways on its swims.

While aquatic mammals have historically been used by militaries for tasks like mine detection and harbor clearance, the Royal Norwegian Navy doesn't seem interested in training the whale or pressing it into service. Nor have officials given any indication of plans to 'interrogate' the creature.

The officer, who said he's previously worked with porpoises in the military, although did not say to what extent, said that training with these animals has often proved unsuccessful, especially when military-grade sonar is in use.

He added other militaries have seen some training successes, but in more limited roles, such as ocean-floor mine search.

Another senior naval official said he found the SeaWorld theory intriguing, because it's plausible the Beluga traveled into the North Atlantic Strip using the Gulf Stream current.

The official also noted that the harness didn't feature any Cyrillic lettering, which is typical for Russian equipment. While it has been reported that there may be whale and dolphin training centers in St. Petersburg, Florida, Seaworld is nearly 25 miles away in Tampa.

Locals believe the whale, originally discovered by fishermen, has now moved to nearby Hammerfest. A recent viral video showed a Beluga retrieving a woman's iPhone after it fell into the water near the harbor there.

It's unclear, though, if that whale was Hvladimir.

SEE ALSO: This 440-Pound Nazi-Fighting Military Bear Is Getting His Own Animated Movie

WATCH NEXT: An M1 Abrams Executes A Drift In Norway

~popular_source-pageview
beluga
How The Other Half Fights
news
norway