The soldier seen in a viral image standing outside his Jeep at a stoplight in the rain to salute a... 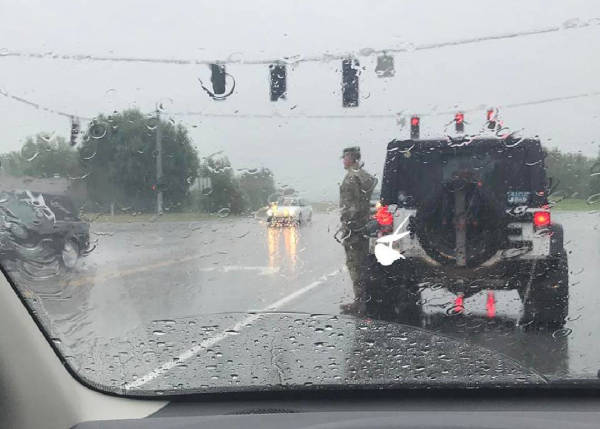 The soldier seen in a viral image standing outside his Jeep at a stoplight in the rain to salute a funeral procession has been identified as a colonel based in Nashville.

Colonel Jack L. Usrey was driving from Fort Knox, Kentucky last week, according to a release from the Tennessee Department of Military, when a funeral procession passed while he was at a stoplight.

“I didn't really think,” Usrey said. “I just did what my parents taught me to do growing up.”

“I stopped, got out, saluted the police escort and held my salute as the hearse and family passed by, then went on my way and didn't give it a second thought.”

Erin Hester of Vine Grove, Kentucky snapped a photo of the act and posted it online where it has been seen more than a million times.

“I always get frustrated when I see cars that don't pull to the side and stop for a procession, but this gentleman went above and beyond,” she wrote in her post.

A mutual friend at Ft. Knox contacted Hester to put her in touch with the soldier, according to the release.

She talked to Usrey today on the phone to thank him for his act and let him know how much it meant to her.

Usrey is a senior army advisor to the adjutant general at Tennessee National Guard Headquarters in Nashville. He has more than 29 years of military service and is a native of Martin, Tennessee.