A redacted transcript of an interview between FBI agents and Reality Winner, the 25-year old NSA contractor who allegedly leaked... 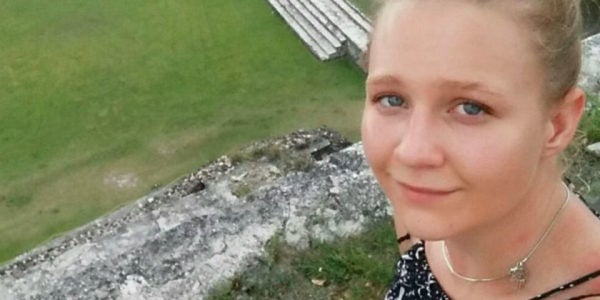 A redacted transcript of an interview between FBI agents and Reality Winner, the 25-year old NSA contractor who allegedly leaked a classified report to a news outlet, revealed that she smuggled the report out of the NSA complex in Fort Gordon, Georgia by folding it into her pantyhose.

According to the transcript, published by Politico on Wednesday, Winner initially denied having mailed the classified report to the media, and instead, insisted she printed it and kept it on her desk for three days, after which she decided to discard it by putting it in a burn bag.

“I thought it was interesting and I thought I would read it,” Winner said, according to the transcript. “And then I said no, and I need to not leave it out on my desk, so I put it in the burn bag.”

After being pressed by the agents, Winner disclosed that she smuggled the report from the secured complex by ” it in half in my pantyhose,” before mailing it out.

“I wasn't trying to … wasn't trying to be a Snowden or anything,” Winner said, referring to Edward Snowden, the former NSA contractor who leaked secrets from the NSA's spying program in 2013.

The leak, published on The Intercept in June, revealed an attempted hack by Russia's military intelligence unit during the contentious 2016 US presidential election. The report, dated May 5, said that Russia had performed a cyberattack on at least one US voting software supplier, along with sending phishing emails to over 100 election officials, days before voters headed to the polls, Politico reported.

At the time, it was considered to be the most detailed official account proving Russian interference in the US election, according to The Intercept.

Winner also voiced concerns as a linguist in the Iranian Aerospace Forces Office and the work environment: “I guess it's just been hard at work,” Winner said. “And I've filed formal complaints about them having Fox News on, you know? Just at least, for God's sake, put Al Jazeera on, or a slideshow with people's pets. I've tried everything to get that changed.”

When asked why she decided to leak the report, information that she knew was “valuable to adversaries,” she said that she believed the secret “sources and methods” mentioned in the report were already known to the public.

“I just figured that whatever we were using had already been compromised, and that this report was just going to be like a one drop in the bucket,” Winner said.

Winner admitted that she didn't check to see if the report was already compromised: “No, I wasn't smart enough to check that out,” Winner said.

“I had, you know, seven, eight months left of a job that didn't mean anything to me because it's Iran, and I'm a Pashto linguist,” Winner said. “Like, what am I doing translating Farsi?”

“I felt really hopeless and seeing that information that had been contested back and forth, back and forth in the public domain for so long, trying to figure out with everything else that keeps getting released and keeps getting leaked, why isn't this getting out there? Why can't this be public?”

Federal sentencing guidelines mandate a minimum prison sentence of nine years, according to prosecutors. Winner's trial is set to commence in March.