No, The Nuclear Bombers Aren’t Going Back On 24-Hour Alert — Yet

Amid what feels like a never-ending cycle of nuclear brinksmanship with North Korea, the Air Force may return its fleet … Continued 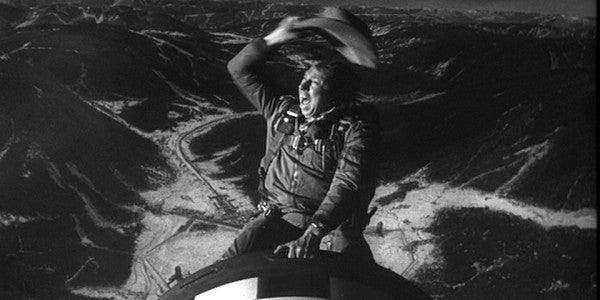 Amid what feels like a never-ending cycle of nuclear brinksmanship with North Korea, the Air Force may return its fleet of nuclear-capable B-52 Stratofortresses to the 24-hour ground alert cycle that defined the bomber fleet for decades during the height of the Cold War, according to an exclusive report from Defense One.

The 24-hour “strip alert,” established by the Department of Defense in 1968 to replace the continuous sorties traced by nuke-laden B-52s, was officially tabled in 1991 by President George H. W. Bush — an end to a retaliatory posture that defined the threat of nuclear war with the Soviet Union and was immortalized in movies like “Fail Safe” and “Dr. Strangelove.”

Don’t panic just yet, though: According to Defense One, the order to return to the 24-hour ground alert “had not been given,” but “preparations were under way in anticipation that it might come.” When reached for comment by Task & Purpose, the Air Force Global Strike Command and the Office of the Secretary of the Air Force characterized the Defense One report as “inaccurate,” claiming that the publication “read too much into routine refurbishment.”

Although Air Force Global Strike Command has yet to actually order a return to the ground alert, Air Force Chief of Staff Gen. David Goldfein told Defense One that the idea behind the preparations is simple: It’s “yet one more step in ensuring that we’re prepared” for modern threats.

“I look at it more as not planning for any specific event, but more for the reality of the global situation we find ourselves in and how we ensure we’re prepared going forward,” Goldfein told Defense One. “The world is a dangerous place and we’ve got folks that are talking openly about use of nuclear weapons.”

The main dynamic in the world is no longer “just us and the Soviet Union,” he added. “We’ve got other players out there who have nuclear capability. It’s never been more important to make sure that we get this mission right.”

The return to a full-time alert would constitute a dramatic shift in the current U.S. nuclear posture. The legislatively mandated Nuclear Posture Review, last published in 2010, suggested that the current system — heavy bombers off full-time alert, nearly all ICBMs on alert, and “a significant number” of nuclear-equipped ballistic missile subs prowling the oceans — “should be maintained for the present,” with the latter two legs of the U.S. nuclear triad making reliance on ever-ready ground-based bombers unnecessary.

But a return to a strip alert may not be the most efficient deployment of Air Force resources, anyway. The 1993 START II treaty between the U.S. and Russia mandates that strategic bombers and nuclear warheads remain physically separated from each other, making it impossible to launch a nuclear strike without the aircraft first authorizing, obtaining, and equipping their payloads — so any immediate “strip alert” would just be a flight line of toothless Stratofortresses awaiting armaments (an extremely thorough chain of custody, according to a recently-declassified 2009 report to Congress).

The Cold War Nuclear Triad has evolved to a more “capabilities-based” posture to deal with multiple aggressors across a spectrum of contingencies.

The return of the 24-hour ground alert isn’t just strategically empty, but deeply dangerous in terms of potential for accidents and mishaps. As nuclear researcher Martin Pfeiffer notes, the mix-and-match between bomber aircraft runs the risk of introducing “warhead ambiguity” into the mix, a case where a nuclear warhead might be mistaken for conventional munitions, as happened in 2007. And as the history of U.S. military nuclear accidents shows, aircraft tend to present the greatest potential for disaster and lost weapons, compared with the relative security of ICBMs and ballistic missile submarines.

Time will tell if Global Strike Command’s own assessment accords with what the history of nuclear weapons tells us. But until then, don’t run for the hills: reviewing the options doesn’t necessarily mean we’ll find ourselves stuck in a brand-new nuclear detente — yet.