Workers at the Hanford Nuclear Reservation in Richland, Wash., have been evacuated and others have been told to take cover... 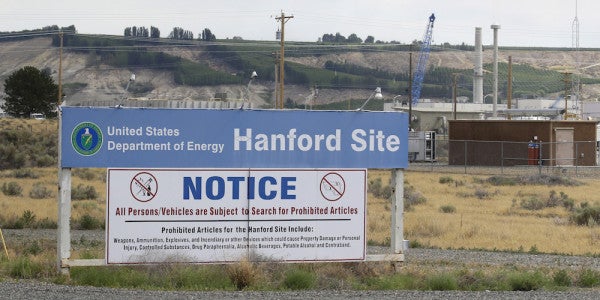 Workers at the Hanford Nuclear Reservation in Richland, Wash., have been evacuated and others have been told to take cover indoors after a tunnel containing radioactive waste caved in Tuesday morning, government officials said.

More than 3,000 workers were initially told to take cover indoors, an Energy Department spokeswoman said, but that number has since increased as a broader area of the site was included in the emergency alert. All staff had been accounted for and there were no reports of injuries, the department said.

There was no indication of a nuclear release, but crews were continuing to survey for contamination, the department said. Crews were hand surveying outer areas around the tunnels for contamination, but closer to the breach were using a remote-controlled device that can do radiological monitoring and take video.

“The Department of Energy informed us this morning that a tunnel was breached that was used to bury radioactive waste from the production of plutonium at the Hanford Nuclear Reservation,” Gov. Jay Inslee said. “This is a serious situation and ensuring the safety of the workers and the community is the top priority.”

Inslee said the White House had reached out to his office.

“Our understanding is that the site went into immediate lockdown in which workers were told to seek shelter and all access to the area has been closed,” Inslee said.

On Tuesday morning, about six Hanford employees, on routine rounds, noticed that an area of soil over one of the tunnels had sunk, Destry Henderson, an Energy Department spokesman, said.

“At that point after noticing the soil had sunk over one of the tunnels there was an emergency declared,” Henderson said. “Upon an additional investigation, crews noticed a portion of that tunnel had fallen, the roof had caved in about a 20-foot section of that tunnel which is more than 100-feet long.”

A 20-by-20-foot area of soil above the tunnels “subsided,” the Department of Energy said Tuesday morning, significantly upgrading the scale of the breach from its previous estimate. Earlier Tuesday, the department had estimated the size of the breached roof area at about 4 feet by 4 feet.

The Energy Department had previously said that the soil sunk by 4 to 6 feet, but later removed that estimate and a spokeswoman was unsure as to the depth of the breach.

The tunnels are covered by about 8 feet of soil, the Energy Department said.

The Department of Energy opened an emergency operations center at the site just before 8:30 a.m. Tuesday and the Hanford Fire Department was on the scene.

The incident was initially declared an “alert emergency,” the lowest level of emergency classification at the site, but was later upgraded to a “site area emergency.” A site area emergency is limited to the boundaries of the Hanford site but could affect staff beyond the immediate facility.

“Responders are getting closer to the area where the soil has subsided for further visual inspection,” the Energy Department said.

The incident is in the 200 East Area, which is located in the center of the 580-square mile reservation. It is home to the Plutonium Uranium Extraction Plant, also known as PUREX, a massive facility more than three football fields in length that was used to recover plutonium from irradiated fuel rods.

The building, which extends 40 feet below ground and is more than six stories tall, has been vacant for nearly 20 years but remains highly contaminated.

A tunnel near the site contains several rail cars that have been temporarily buried because they were used to transport irradiated fuel rods and remain contaminated.

Brian Calvert, an emergency planner with Benton County Emergency Services, said multiple law enforcement and fire agencies were standing by, if need be.

Hanford made plutonium for nuclear weapons for years and is in the midst of a multidecade, multibillion-dollar cleanup of the leftover waste.