Hundreds of 4th Infantry Division soldiers could qualify for the Defense Department's new Atomic Veterans Service Certificate, thanks to the division's participation in nuclear tests in the 1950s and 1960s. 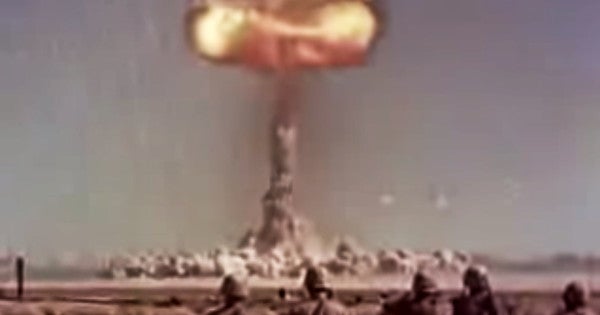 Hundreds of 4th Infantry Division soldiers could qualify for the Defense Department's new Atomic Veterans Service Certificate, thanks to the division's participation in nuclear tests in the 1950s and 1960s.

The tests were part of a strange chapter of the division's history, when the Pentagon sought to build a unit capable of fighting amid nuclear warfare. Troops from the division joined in at least two mock wars in the Nevada desert, maneuvering through the fallout of nuclear test blasts.

The certificate is designed to honor troops exposed to radiation during the Cold War. The Pentagon said it's not a medal and “the certificate does not carry any other value or entitle the bearer to benefits.” Eligible veterans can learn more online at tinyurl.com/y6xdmz9l.

Starting after World War II, leaders of the Army, Navy and Marine Corps were fascinated with the prospect of fighting through a nuclear conflict. There was a fear among those branches that they could be irrelevant if all America needed in future fights were bombers and missiles.

So sailors headed to Pacific testing sites such as the Bikini Atoll for nuclear drills as the latest atomic bombs were tested, and the Army and Marines ventured into Nevada, where America ran a long-running series of bomb tests.

In 1957, more than 1,100 4th Infantry Division troops waited 8 miles away from a 440-kiloton atomic blast that was part of Operation Plumbbob.

Huddled in trenches, they waited as the device, three times as powerful as the bomb dropped on Hiroshima, detonated.

The Defense Department described how troops moved into the blast area a short time later.

Another 4th Infantry Division atomic test involved the weirdest weapon in the history of the Army: The Davy Crockett, a short-range nuclear weapon designed for battlefield use.

The Davy Crockett was a miniature nuke that would be carried into battle by infantry troops or mounted on a Jeep. The “tactical” weapon could be launched by a lieutenant and was designed to target massed enemy forces with a small nuclear blast.

In 1962, 4th Infantry Division troops again headed to the Nevada desert with their Davy Crockett mounted atop an armored personnel carrier. In the test, the little nuclear rocket flew for less than 2 miles before it detonated.

In the shadow of a mushroom cloud, several hundred 4th Infantry Division troops headed off to mock war.

“Troops entered their vehicles and moved into the shot area, where they spent about 50 minutes conducting maneuvers,” a Pentagon report said.

The Pentagon says none of the soldiers in the two tests suffered ill-effects from radiation.