Two nurses and an aide were indicted Tuesday on multiple charges, including one charge of felony murder, in the Feb.... 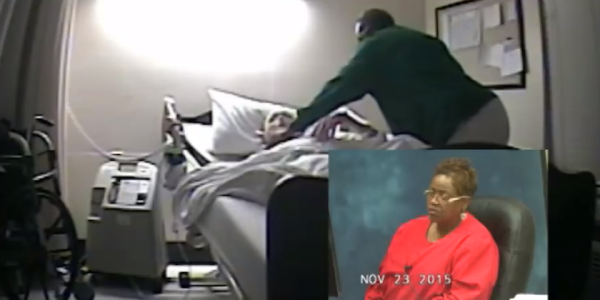 Two nurses and an aide were indicted Tuesday on multiple charges, including one charge of felony murder, in the Feb. 27, 2014, death of James Dempsey, a World War II veteran and patient at the Northeast Atlanta Health and Rehabilitation in Georgia.

The 89-year-old Navy vet, who later retired from the Army National Guard, died as he gasped for air and his pleas for help went ignored by the staff, according to Georgia NBC affiliate 11Alive, which first broke the story.

On Tuesday, a grand jury in DeKalb County handed down charges to former licensed practical nurse Loyce Pickquet Agyeman, nursing supervisor Wanda Nuckles, and Mable Turman, a certified nurse assistant. Agyeman faces charges of felony murder and neglect to an elder person. Nuckles is charged with depriving an elder person of essential services, and Turman was indicted for neglect to an elder person. All three face a single count of concealing the death of another, and warrants have been issued for their arrests.

An investigation into Dempsey’s death was launched in November 2017 after 11Alive uncovered footage from a hidden nanny-cam placed in the room by Dempsey’s son and gained access to previously sealed court depositions from the nursing home staff. Nursing home attorneys attempted to prevent media from getting hold of the hidden camera footage and video deposition, but a DeKalb County judge ordered documents in the case to be unsealed, Fox News reports.

The video shows Dempsey repeatedly calling for help and crying out that he could not breathe, though nobody immediately responded. One of the video’s more egregious moments shows Nuckles laughing as the staff tried to start an oxygen machine. When asked by attorneys for Dempsey’s family what she thought was so funny at the time, Nuckles said that she couldn’t recall.

In the deposition, Nuckles also told attorneys that when she realized the elderly patient had stopped breathing, she rushed to his room and took over CPR. But that account doesn’t jibe with the footage. Instead, the video revealed that nobody was doing CPR when Nuckles arrived, nor did anyone start immediately after.

After the lawyers showed Nuckles the video, she claimed it was an honest mistake and said her account of events was based on her normal procedure.

The nursing home employees now facing charges didn’t have to surrender their nursing licenses until September 2017, after 11Alive sent the Georgia Nursing Board a link to the video, Task & Purpose previously reported.

A trial date for Agyeman, Nuckles, and Turman has not been set.