Today at the 95th Disabled American Veterans National Convention, I gave my final major address as President to our nation’s … Continued 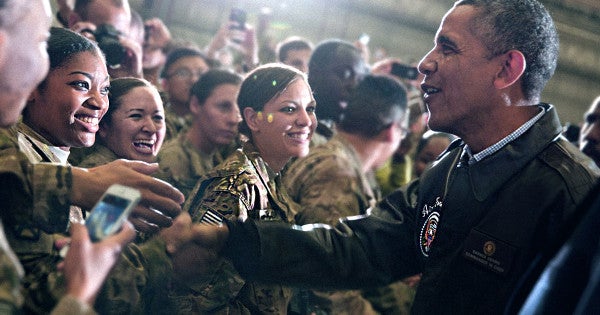 Today at the 95th Disabled American Veterans National Convention, I gave my final major address as President to our nation’s veterans. As I reflect on these past seven and a half years, I want you to know I have had no greater honor than serving as your Commander-in-Chief.

In your heroism we see the enduring spirit of America. It’s through your sacrifices that this country we love remains free and strong. I believe that our nation has a sacred covenant with our veterans – that just as you served to protect us, we have a moral obligation to take care of you and your families when you come home. Working to uphold that covenant has been one of my most solemn responsibilities as president.

“Just as you served to protect us, we have a moral obligation to take care of you and your families when you come home.”

After two major ground wars in Afghanistan and Iraq, I’m humbled by the service of our veterans and mindful that our obligations to our newest veterans – our proud 9/11 Generation – have only just begun.

When I came into office, we had nearly 180,000 American troops in Afghanistan and Iraq. Today that number is less than 15,000. Most of our troops have come home.

To all of you who served in Afghanistan, you can take enormous pride in the progress you helped achieve. You toppled the Taliban, drove al Qaeda out of its camps, and delivered justice to Osama bin Laden. Today, millions of Afghan boys and girls are in school and Afghans have a democratic government. You trained Afghan forces to take responsibility for their own security, so that we are no longer engaged in a major ground war in Afghanistan. Now, we’re focused on supporting Afghan forces and counterterrorism missions against networks like al Qaeda and ISIL.

To all of you who served in Iraq, we saw your heroism in pushing out the dictator Saddam Hussein and in defeating an insurgency. And no matter what has happened since, your valor – in the deserts, in fierce urban combat – will be honored in the annals of military history.

Of course, your service to our nation did not end when you took off the uniform. Today, all across America, your generation is hard at work, using the skills you’ve forged in battle to build our communities, drive our economy forward, and continue serving this country we love.

“Your valor – in the deserts, in fierce urban combat – will be honored in the annals of military history.”

In this work, you are not alone. Working together over these past seven and a half years, we’ve delivered real progress for you and your families. And we can’t let up.

First, we have to keep fighting for the resources our veterans deserve. Since I took office, we’ve made historic increases to veterans funding and I’ve proposed another increase for next year – altogether, we’ll have increased veterans funding by more than 85 percent. When Congress returns in the fall, it should fully fund our budget for the VA.

Second, we have to deliver the health care you’ve been promised. We’re offering more tailored care for women veterans, to ensure that they get the care, respect and dignity they deserve. For veterans with post-traumatic stress, we made it easier to get the VA care you need – no matter what war you served in. We’ve increased funding for veterans mental health care by more than 75 percent. But too many veterans still struggle to get the care they need. And when you have an urgent need for mental health care, you should be able to get the services you need the same day.

And given the inexcusable problems of long wait times that came to light, we’ll keep using every tool at our disposal to expand access to care-extending clinic hours, opening new facilities, using new tools like telehealth, and leveraging care in the community. Today, the VA is delivering more health care to more veterans than ever before. But we will not be satisfied until our veterans are satisfied and the VA is transformed to serve veterans better. That’s what Secretary McDonald is working to do through the MyVA initiative.

Third, we need to keep reducing the disability claims backlog. We’ve now cut the backlog of initial claims by nearly 90 percent since its peak in 2013. The next step is addressing the broken appeals process that is keeping hundreds of thousands of veterans waiting years for claims decisions, and we’ve proposed a major package of comprehensive reforms that we call on Congress to pass.

Fourth, we’ve got to keep up the fight to end the tragedy of veteran homelessness. Today, I announced that, across the nation, we have now reduced the number of homeless veterans by 47 percent – nearly half – since 2010. We’ve helped bring tens of thousands of veterans off the streets.

Fifth, we have to keep fighting to give you and your families the opportunities to live the American Dream that you helped to defend. Under the Post-9/11 GI Bill, we’ve provided $65 billion to help more than 1.6 million veterans and families realize their dream of an education. Every state in the country is now providing in-state tuition at public universities to those of you recently transitioning out of the military. Under the leadership of the First Lady and Dr. Biden and their Joining Forces initiative, we’ve seen companies across the country step up, hiring or retraining more than 1.2 million veterans and military spouses.

Together, we’ve cut veterans unemployment by more than half since its peak in 2011 – down to 4.2 percent – lower than the national average. And the drop is even steeper for younger veterans, with the unemployment rate for the Post-9/11 generation down from a high of 15.2 percent in January 2011 to 4.4 percent today.

We’ve made a lot of progress. But we’ve still got more to do to help you share in the American Dream. I know we can do this. Because over these past seven and a half years, I’ve seen the spirit of America. I’ve seen the strength of America’s veterans. And when we take care of each other, when we uphold that sacred covenant, then there is nothing we can’t do.