Finally, years after it became a rallying cry for Republicans across the country, a GOP bill to repeal and replace... 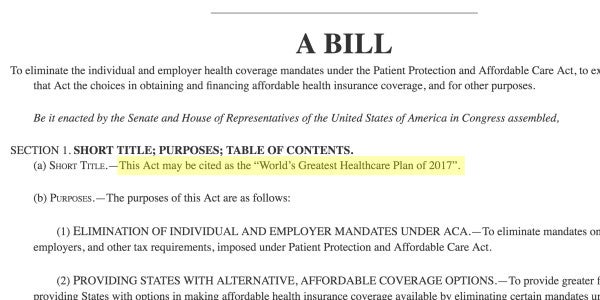 Finally, years after it became a rallying cry for Republicans across the country, a GOP bill to repeal and replace Obamacare is in Congress’s hands. Actually, several have turned up. And one of them? It’s the world’s greatest health care plan of 2017. No really, that’s its name.

Since then-President Barack Obama signed the Patient Protection and Affordable Care Act into law in 2010, Republicans have railed against its health-insurance mandate for all Americans. But replacing a complex plan that expands Medicaid and insures tens of millions isn’t easy. The official GOP repeal-and-replace plan, unveiled Monday, has been beaten to a pulp not just by liberals, but by conservatives, as well, who are afraid it keeps too many of Obamacare’s myriad promises intact. Even Donald Trump has said the bill is up for “review and negotiation.”

Related: 5 Things You Need to Know About the GOP’s Obamacare Replacement»

But Republican Rep. Pete Sessions of Texas perhaps inspired by Trump’s penchant for gentle understatement, is sure that no matter how many revisions or amendments it goes through, his Obamacare replacement— filed just before the administration’s bill was unveiled, on March 1 — is the best, absolutely wonderful, just terrific.

“This Act may be cited as the ‘World’s Greatest Healthcare Plan of 2017,’” reads Section 1(a) of H.B. 1275, a bill “to eliminate the individual and employer health coverage mandates under the Patient Protection and Affordable Care Act.”

Silly-named legislation is something of an American tradition, from 2011’s Obamacare repeal bill — the Revoke Excessive Policies that Encroach on American Liberties, or REPEAL, Act — to 1997’s Democratic-sponsored No Private Contracts to Be Negotiated When the Patient Is Buck Naked Act. And, of course, there’s the PATRIOT Act, because nothing is more patriotic than letting the government dabble in indefinite detention and warrantless searches.

What makes Sessions’ bill so great? Well, for starters, it’s so small — even smaller than the 128-page GOP bill that had Sean Spicer doing a measuring act for reporters on Tuesday:

I just can't get over this argument.

"Look at the size. This is the Democrats. This is us." pic.twitter.com/0lPfRxFvMf

Of course, Sessions’ and the administration’s bills are likely to get a lot bigger once pols and lobbyists lard them with the same sorts of industry giveaways that ended up in Obamacare. But they’ll still be the world’s greatest! Of 2017! If you think that’s amazing, wait till you see the Obamacare repeal bills they put up in 2018, after these great bills die on the congressional floor.