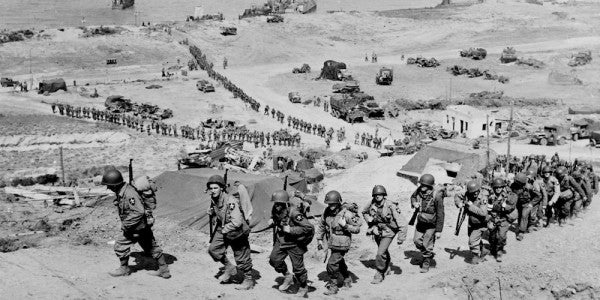 Judge Frank Forchione bristled on Wednesday when he quizzed two younger defendants about D-Day on June 6, 1944.

Two men facing criminal charges struggled to explain to Forchione the significance of D-Day and the Normandy Invasion during World War II.

The Stark County Common Pleas Court judge gave the defendants an assignment to be completed before they are sentenced at a later date: Write a comprehensive book report after reading, D-Day: June 6, 1944: The Climactic Battle of World War II.

“It's ridiculous,” the judge vented during Wednesday's court hearings, the same day as the 74th anniversary of D-Day. “Everybody's coming in here not knowing anything about World War II — the best generation ever.”

But the 57-year-old judge had kinder words for Dalton L. Gadd, 19, of Canton, who was being sentenced for a charge of carrying a concealed weapon, a fourth-degree felony. Gadd also had been charged with using weapons while intoxicated, a first-degree misdemeanor. He previously had pleaded guilty to both counts.

Gadd also had been instructed to read the D-Day book and write a lengthy report. At his sentencing hearing Wednesday, Forchione complimented the defendant on the finished product.

He sentenced Gadd to three years of probation, including one year of intensive supervision. Gadd faces 18 months in prison if he violates the terms of probation, Forchione warned. Gadd also must undergo drug and alcohol monitoring and complete 200 hours of community service at Ohio Veteran's Memorial Park in Clinton.

Forchione, known for creative sentencing, has often praised the sacrifices of soldiers in the U.S. military. In 2015, he required a Pittsburgh area man in a Canton VFW theft case to write a report related to Pearl Harbor and D-Day and the importance of military veterans.

D-Day was the largest seaborne invasion in history, critical to liberating France and defeating Adolf Hitler and Nazi Germany in World War II.

But the D-Day anniversary was perhaps the most impassioned Forchione has been on the subject.

Gadd said he shouldn't have committed the offense and expressed remorse.

According to court records filed by the Stark County Prosecutor's Office, Gadd was found in the common area of the McKinley Grand Hotel in downtown Canton on Feb. 17 with a loaded AR-15 rifle in his backpack. He had a blood alcohol concentration of .038 percent, less than the legal driving limit. No shots were fired and the gun was not pointed at anyone. (NOTE: Information has been corrected to fix an error. See correction below. 6 p.m.)

Gadd apparently had been causing a disturbance before police were called.

He had been staying at the hotel and said he was planning to go target shooting the next day, said his attorney Rick Pitinii.

The judge asked Gadd what he had gleaned from the book. “I learned that you should … respect your veterans and also learned that people give their lives for this country and for our freedoms that we have now.”

“Your book report was very good,” said Forchione, whose late father served in the Navy during the Korean War. “… And you made some very important points in there. There's certain people (who) get it and I think you're starting to get it and I give you credit.”

“On June 6 (1944), all the kids your age are fighting these Germans up on the cliff trying to protect us, right?”

The solders of D-Day exhibited leadership and camaraderie, the judge said. “Instead, the majority of the young people (today) are so concerned about self-promoting themselves on Facebook or bullying somebody on Instagram, and it's got to end.”

“My job is not to ruin your life,” the judge said, complimenting the defendant's attorney, Pitinii. “My job is to get you back on track.”

As the hearing concluded, Forchione gave Gadd one more assignment.

Instead of serving 30 days in jail, Gadd was told to spend three to four hours on Wednesday visiting a nursing home or a VFW post to talk with military veterans.

The young men of D-Day “demonstrated courage, they demonstrated valor,” Forchione said. “What are you going to do today to demonstrate that you have those traits?”