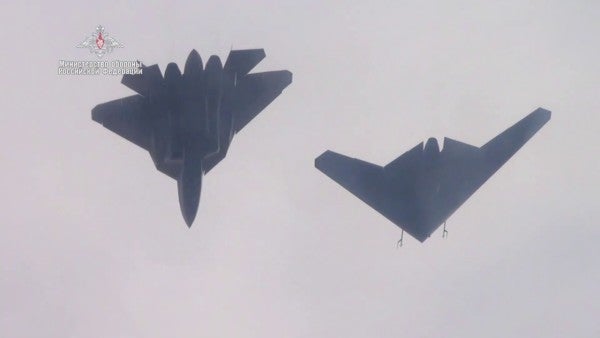 Russia's new heavy combat drone has flown for the first time alongside the country's most advanced fighter jet, giving the fighter a new edge in battle, the Russian defense ministry announced Friday.

“The Okhotnik unmanned aerial vehicle has performed its first joint flight with a fifth-generation Su-57 plane,” the ministry said in a statement, according to Russia's state-run TASS news agency.

The two Russian aircraft flew together “to broaden the fighter's radar coverage and to provide target acquisition for employing air-launched weapons,” the ministry added.

Photos of the Okhotnik first surfaced online in January, but it wasn't until June that the unmanned aircraft was formally unveiled.

This summer, the heavy attack drone completed its maiden flight, during which it flew circles over an airfield for 20 minutes.The flight involving both the Okhotnik drone and the Su-57 fighter appears to confirm what some have suspected for months — that the stealthy flying-wing drone was designed to fight alongside and provide critical battespace information to Russia's new fifth-generation fighters.

In January, shortly after photos of the Okhtonik appeared online, photos of an Su-57 with an interesting new paint job appeared. The redesign featured silhouettes of a Su-57 and a flying-wing aircraft that looked a lot like the Okhotnik.

Russia claims that the Okhotnik has stealth capabilities, a byproduct of its shape and an anti-radar coating, and is equipped with electro-optical, radar, and other types of reconnaissance equipment.

The heavy attack drone is currently controlled remotely, but in future tests, it is expected to perform in a semi-autonomous state and eventually a completely autonomous mode, TASS reports.

Testing with various armaments is expected in the next few years, and the drone will be handed over to Russian troops around 2025.