Horn said Balfour Beatty "failed to live up to your responsibility for taking care of the people that are living in these houses." 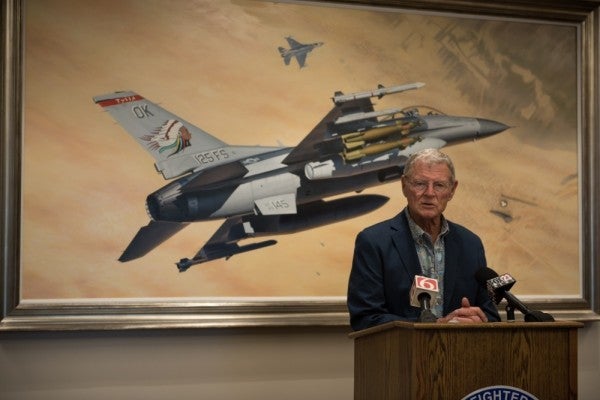 At a hearing of his committee, Inhofe asked Air Force Secretary Barbara M. Barrett, “If you have a repeater like this and misconduct like this, why is it that they are still there?

Barrett said, “That company received a letter of concern from the Air Force expressing that the Air Force has lost confidence in their ability to perform under their contract. That letter was issued in September.

“So they are under financial penalty right now. In addition to that, it has been requested that they submit an action plan for what they will be doing. That plan is due by the end of the year, and there will be metrics and accountability from that plan or the Air Force will be initiating the elements accessible to us under the dispute resolution procedures, which could lead to anything up to a default on their lease.”

Inhofe, R-Tulsa, has held several hearings and visited Tinker repeatedly since reports from Reuters and other news outlets documented severe problems, including mold and insect infestation, at military family housing.

Residents of the base, located in Oklahoma County, complained that company officials were dismissive and that problems were rarely fixed. Balfour Beatty Communities operates about 600 units on Tinker and 43,000 on bases nationally.

Regarding the problem nationally, lawmakers, base commanders and service officials have pleaded ignorance, saying oversight has been limited since housing contracts were given to private companies.

Inhofe and Horn backed provisions in the annual defense bill that would give residents more rights and impose standard measurements for private housing companies' performance. The military also will be required to conduct more oversight of housing. The defense bill may come up for a final vote this week.

Horn, D-Oklahoma City, said she first heard of the conditions early this year from a military family member at Tinker.

“I was angry and frustrated and hoping it was a limited problem but, sadly, found out it was not,” Horn told Richard C. Taylor, a Balfour Beatty Communities executive, at a hearing of the Armed Services subcommittee on Readiness last week.

“Infestations are rampant across Tinker. And it's one of those things that's so outrageous to me that we're not taking care of service members and their families.”

At the hearing, Horn showed an enlarged photo of extensive mold in a Tinker home managed by Balfour Beatty Communities.

Horn referenced reports by Reuters and CBS News that Balfour Beatty Communities had falsified maintenance logs at Tinker to make it appear requests were handled more quickly than they were. She asked Taylor if the company would apply corporate incentive payments received during that time to housing repairs.

Taylor said the company was working with the U.S. Department of Justice on its inquiry and had hired an outside company to investigate the allegations.

“In the event that we are found to have falsified records then we are absolutely committed to refunding any incentive fees received back to those projects,” Taylor told the subcommittee.

Taylor said he endorsed the national defense bill provisions, including the tenants' bill of rights. Leaders from other private housing contractors testified at the subcommittee that they were also working on improvements.

U.S. Rep. John Garamendi, D-Calif., chairman of the Readiness subcommittee, visited Tinker earlier this year with Horn. He said last week the companies have had enough time to scrutinize their own conduct and must now act.

“We ask our service members and their families to sacrifice enough in service to their country, we will not ask them to accept sub-standard housing as well,” he said.

“They deserve better and this committee will demand that they get it.”