One Government Agency Wants The Pentagon To Screen For Gambling Addictions

The military should screen its personnel for gambling disorder the same way it does for other addictive disorders, according to... 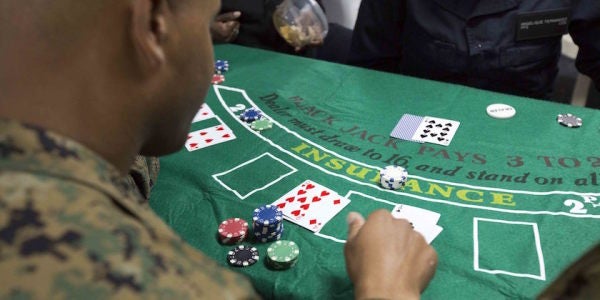 The military should screen its personnel for gambling disorder the same way it does for other addictive disorders, according to a government watchdog report.

The Government Accountability Office released a study last week showing that less than 0.03 percent of service members were diagnosed with gambling disorder or were seen for problem gambling through the Military Health System between 2011 and 2015.

While the report acknowledges those numbers are low, it notes that the Defense Department and Department of Homeland Security may not be able to identify and provide treatment to those who need it without specifically screening for it. Only 10 percent of people with gambling disorder seek treatment, according to the American Psychiatric Association.

“While gambling disorder is not a frequently diagnosed condition, the preoccupation with gambling, financial hardship, and increased risk of suicide can pose a risk to individual readiness,” the report says.

In a letter responding to the report, the Defense Department disputed the need for specific screening. Instead, it said it would update its policies to promote education and awareness activities intended to prevent or reduce problematic gambling.

“The decision on whether to screen for a disorder is carefully scrutinized with the DoD, with the priority given to high risk, high volume, and problem-prone disorders with validated measures for assessment,” the Defense Department wrote.

Historically, the military has a unique relationship with gambling.

Slot machines were removed from U.S. military installations in 1951 due to a law passed by Congress, but the report notes that many bases are located in states that permit some form of gambling. Virginia, for example, allows off-track betting.

There also are overseas bases that allow slot machines in places like bowling alleys and officers’ clubs. The machines are most prevalent at U.S. bases in Japan and Germany, although the Navy also has them in Korea, Italy, Spain, Diego Garcia, Greece and Singapore.

Overseas slot machines throughout the Defense Department generated $538.9 million between 2011 and 2015.