The first hint that Air Force Tech. Sgt. Sam Aldrich was an unwitting player in a Facebook military romance scam... 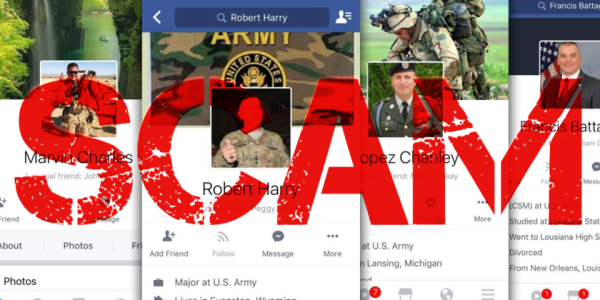 The first hint that Air Force Tech. Sgt. Sam Aldrich was an unwitting player in a Facebook military romance scam was a doctored image of him with a Filipina woman he had never met.

Aldrich — a cybersecurity airman stationed at Lackland Air Force Base, Texas — discovered in March that a scammer had obtained photos posted before 2014, when his Facebook profile was less secure.

The con artist, apparently based in the United Arab Emirates, used the images to create a fake account in the name of “Fred Aldrich,” then posed as a U.S. airman to woo women overseas and trick them into sending money.

Online military romance scams are so commonplace that military officials have posted warnings to civilians not to fall for them.

The Army’s Criminal Investigation Command warns people involved in online dating to proceed with caution when corresponding with those claiming to be U.S. soldiers serving overseas.

CID receives hundreds of allegations a month from victims of people they met online who claimed to be soldiers, according to a warning on the CID website.

“The ‘Soldier’ then begins asking for money for various false, service-related needs such as transportation costs, communication fees, marriage, processing and medical fees,” the warning says. “Victims of these online scams have lost tens of thousands of dollars, with a very low possibility of recovery.”

Ken Scar, 48, a reserve Army staff sergeant, discovered that his photos were being used in the scams when he got a late-night call from a woman who had fallen for one of them in 2014.

Since then he’s found more than 120 fake Facebook profiles that combine his photographs with false identities.

“I don’t have anything to hide, so I left my Facebook wide open,” Scar said.

His mistake had opened the door to scammers in Pakistan and Nigeria to steal his photos. Last month, Scar made public a Facebook album of fake profiles and hopes it can help combat the scams.

Aldrich, meanwhile, contacted the woman he saw in the doctored images last month and discovered she had been in love with his doppelganger for a year.

The 39-year-old Filipina waitress working in Lebanon, who asked to remain anonymous, said the man she met on Facebook whom she knew as “Fred” was her first online romance.

“He pretend to be U.S. Army … based in Iran and started to tell some story about his life,” she told Stars and Stripes via text message.

She fell in love with her online suitor. She created doctored pictures of the pair, drew his portrait and planned to return home to the Philippines with him after eight years of working overseas.

Then she got a message from “Fred” saying he’d been detained in the UAE after accidentally bringing ammunition into the country, and that he needed $500 to post bond and leave. She sent the money, but grew suspicious when he asked her to send more. Finally, she discovered that she was the victim.

Aldrich said the con artist pretended he had been deployed to Afghanistan, posting comments and news clips from the war-torn country. “You could see other women commenting on his posts and saying they hope he is OK,” he said.

Aldrich reported the fake profile to the Air Force, which investigated and, after determining it wasn’t a counter-intelligence operation, advised him to report the case to the FBI.

“These guys get photos of white military guys and they will make multiple accounts on social media and contact middle-age women from places like the Philippines and try to get money from them,” he said.

Aldrich said he feels sorry for the victim. “She has been in love with the image of me for a while.”

There’s also a danger that servicemembers might be drawn into compromising situations through online scams that could be exploited by foreign-intelligence services, he said.

“It is important to continuously train all personnel in good cyber hygiene,” Allenby said. “There aren’t any silver bullets, but a few habits — for example, keep anti-virus software up to date; always remember that, if something or someone appears to be too good to be true, it probably is, and don’t click on things you aren’t sure about — can help avoid becoming a victim of cybercrime.”

It’s also important to look for friendships and social networks in the real world, he said.

“Everyone gets lonely sometimes, and that’s especially true for young warriors, but finding companionship on the net is a risky bet,” he said.