Oops. This ‘Incoming Missile’ Warning Was Accidentally Sent Out Across Air Base

A bright-red, mock “incoming missile” message that was mistakenly sent to all wing personnel at Spangdahlem Air Base on Tuesday... 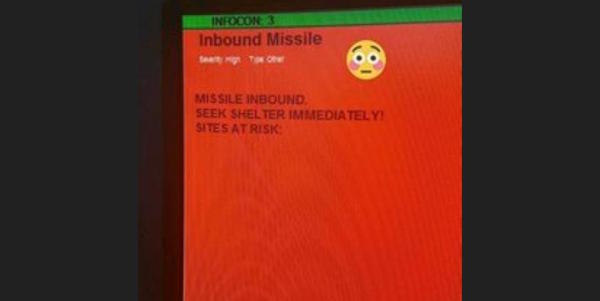 A bright-red, mock “incoming missile” message that was mistakenly sent to all wing personnel at Spangdahlem Air Base on Tuesday was recalled in about eight minutes.

It wasn’t enough time to cause widespread panic but it was just enough time for someone to take a screen shot of the image and post it to social media, causing the wing some embarrassment as people poked fun at the error on Facebook and it was first reported by Air Force Times.

“One of the command post controllers was building a template for this specific thing that was posted,” McGarry told Stars and Stripes on Thursday. “And he inadvertently sent it to everybody,” when it was supposed to be sent to only one person as a test message.

The message went out over the base’s AtHoc emergency alert system, which is used typically for weather warnings. “If you’re looking at your desktop, it’s got a little icon in the bottom right,” McGarry said of the system notification. “It will open up with a message with stuff you need to know.”

McGarry said he found out about it while sitting at his desk. “We were, like everyone else, very curious about it,” he said of the wing public affairs staff. The command post confirmed it was inadvertent, he said.

About eight minutes later, a message in blue was sent out informing airmen to disregard the incoming missile warning, that it was a test. There were no sirens or other force protection changes in the interim, McGarry said.

The individuals involved in the error have been counseled, McGarry said, and their leadership is using the incident as a learning opportunity. Training and distribution checklists have been updated to avoid similar situations from happening in the future, he said.

“It probably could have been handled with relatively mild embarrassment at a lower level, but here we are,” McGarry said, referring to the public attention the incident received.

The photograph of the initial red missile warning — with a concerned-looking emoji added to the image — was posted by someone to the Air Force amn/nco/snco Facebook page, run by former airman Steven Mayne.

People poked fun at the mistake, with comments like, “Oh look, time to change my shorts,” and “Guess you could say it’s a love rocket,” the latter being a reference to Valentine’s Day, the day the incident happened.

But others criticized the need to take a screen shot of the message and share it publicly before, perhaps, even knowing if it was legitimate.