The World War II-era deception plot known as Operation Mincemeat is getting a movie starring Oscar winner Colin Firth, directed by John Madden, and written by Emmy-nominated Michell Ashford, whose credits include ​​The Pacific ​and ​​Masters Of Sex. 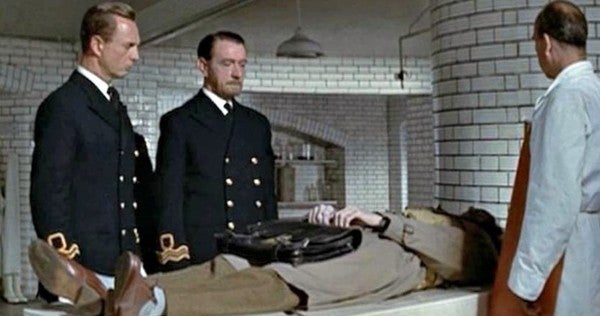 One of the greatest feats of espionage in modern military history is getting a silver screen treatment for the first time in more than 60 years with a little help from the one of the writers of HBO's The Pacific.

Variety reports that the World War II-era deception plot known as Operation Mincemeat is getting a movie starring Oscar-winner Colin Firth, directed by John Madden, and written by the Emmy-nominated Michelle Ashford, whose credits include The Pacific and Masters Of Sex.

“In the context of World War II narratives, the story of Operation Mincemeat is unique – a bizarre and seductive cinematic blend of high-level espionage and ingenious fiction, where the stakes could hardly be higher,” Madden told Variety.

Here are the basics: On April 30, 1943, a fisherman pulled what appeared to be a the body of Royal Marine officer out of the coast of southwestern Spain. Within weeks, the official-looking envelop in the dead man's attache case was turned over to German intelligence officers stationed there for surreptitious examination.

The envelope, as it turned out, contained correspondence that appeared to detail plans for an Allied invasion of German-held Greece and Sardinia from Tunisia through Mediterranean Sea.The Germans reinforced their positions there in anticipation of an attack as the envelope was returned to London from Spain — if they were careful enough, the Allies would never know they'd intercepted the plans.

The whole thing was a ruse. The Royal Marine was a actually a British pauper who died from eating rat poison, his body clothed in officer's garb and the contents of his briefcase meticulously crafted to look like official documents — and less than two months after the Germans ordered its forces diverted to the Peloponnese peninsula and the island of Sardinia, the Allies invaded Sicily with a force of 160,000 troops, toppling Italian dictator Benito Mussolini and puncturing Fortress Europe through Italy, Winston Churchill's “soft underbelly” of Europe.

“Michelle Ashford's script fuses multiple strands and moods: tense, romantic, thrilling, unexpectedly funny, and endlessly surprising,” Madden told Variety. “It tells a richly human story of the soldiers we seldom see, who fight a different kind of war in shadows and deception, haunted by the knowledge that certainty and guarantee of success are nowhere to be found.”

This might sound like Hollywood hype, but it's not totally far off. While the cinematic version of the Operation Mincemeat based on Montagu's 1953 account if the caper and titled The Man Who Never Was hit theaters in the UK in 1956, Montagu's original book was explicitly authorized by the British security services as a post-war propaganda tool.

By contrast, a movie based on Macintyre's deep history of Operation Mincemeat promises to provide a more complete picture of the insane complexity over the actual deception on both the British and German side that makes Operation Mincemeat so intriguing. Consider this excerpt from this excellent 2010 review from The New Yorker:

As Macintyre observes, the informational supply chain that carried the Mincemeat documents from Huelva to Berlin was heavily corrupted. The first great enthusiast for the Mincemeat find was the head of German intelligence in Madrid, Major Karl-Erich Kühlenthal. He personally flew the documents to Berlin, along with a report testifying to their significance. But, as Macintyre writes, Kühlenthal was “a one-man espionage disaster area.” One of his prized assets was a Spaniard named Juan Pujol García, who was actually a double agent. When British code breakers looked at Kühlenthal's messages to Berlin, they found that he routinely embellished and fictionalized his reports. According to Macintyre, Kühlenthal was “frantically eager to please, ready to pass on anything that might consolidate his reputation,” in part because he had some Jewish ancestry and was desperate not to be posted back to Germany.

When the documents arrived in Berlin, they were handed over to one of Hitler's top intelligence analysts, a man named Alexis Baron von Roenne. Von Roenne vouched for their veracity as well. But in some respects von Roenne was even less reliable than Kühlenthal. He hated Hitler and seemed to have done everything in his power to sabotage the Nazi war effort. Before D Day, Macintyre writes, “he faithfully passed on every deception ruse fed to him, accepted the existence of every bogus unit regardless of evidence, and inflated forty-four divisions in Britain to an astonishing eighty-nine.” It is entirely possible, Macintyre suggests, that von Roenne “did not believe the Mincemeat deception for an instant.”

Operation Mincemeat will go into pre-production later in 2019, Variety reports. No word on a premiere date, except that it can't get here soon enough.

SEE ALSO: Ben Affleck Is Making A Movie About The Secret Army Unit That Tricked Nazis Into Chasing 'Ghost Armies' During WWII