A Navy fighter pilot who less than five months ago became head of Navy forces in the Middle East has... 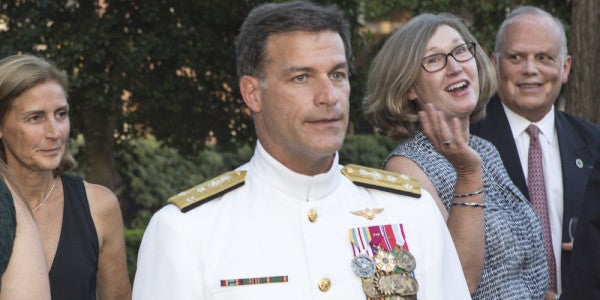 A Navy fighter pilot who less than five months ago became head of Navy forces in the Middle East has been selected as the next commander of U.S. Pacific Fleet at Pearl Harbor.

Secretary of Defense James Mattis announced Friday that President Donald Trump nominated Vice Adm. John C. Aquilino for the rank of four-star admiral and the important Hawaii job at a time of concern over fleet operations and safety in the region and extreme tensions with North Korea.

Adm. Scott Swift, current commander of U.S. Pacific Fleet, was seen as a shoo-in as the next head of U.S. Pacific Command at Camp H.M. Smith — until he was told he was being passed over for the job by Adm. John Richardson, chief of naval operations, in the wake of a series of Navy ship collisions in the Western Pacific last year.

Swift in late September announced he planned to retire — with no date given.

“Submitting this request now is done with an abundance of respect and admiration for the CNO and his leadership, as well as for the chairman (of the Joint Chiefs of Staff) and secretary of defense as both of them face the challenge of selecting someone to step into the leadership role” of Adm. Harry Harris, head of Pacific Command.

It was an unusual public response to the chief of naval operations by the four-star commander.

Aquilino, a native of Huntington, N.Y., graduated from the U.S. Naval Academy in 1984. He entered flight training and earned his wings in August 1986. He served in numerous operational fighter squadrons flying the F-14 A/B Tomcat and the F-18 C/E/F Hornet, his Navy biography states. He has more than 5,100 flight hours and over 1,150 carrier-arrested landings.

In his most recent job, which he assumed Sept. 19, Aquilino was commander of U.S. Naval Forces Central Command and commander of Fifth Fleet and Maritime Forces Bahrain.

The world’s largest fleet command, U.S. Pacific Fleet encompasses 100 million square miles and nearly half the earth’s surface, from Antarctica to the Arctic Circle and from the U.S. West Coast into the Indian Ocean. Pacific Fleet has about 200 ships and submarines, nearly 1,200 aircraft and more than 130,000 sailors and civilians.