Trump brought on stage Army 1st Lt. Clint Lorance and Maj. Mathew Golsteyn, who Trump pardoned last month for cases involving war crimes. Lorance was serving a 19-year sentence for ordering his soldiers shoot at unarmed men in Afghanistan, and Golsteyn was to stand trial for the 2010 extrajudicial killing of a suspected bomb maker 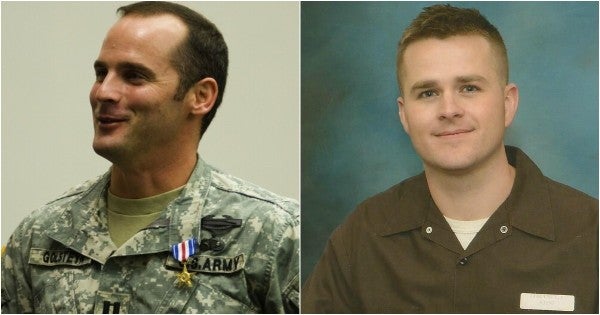 The dinner, which raised $3.5 million for the state party, was met with unusual secrecy. The 1,000 attendees were required to check their cell phones into individual locked cases before they entered the unmarked ballroom at the south end of the resort. Reporters were not allowed to attend.

But the secrecy was key to Trump's performance, which attendees called “hilarious.”

Riding the high of the successful event turnout — and without the pressure of press or cell phones — Trump transformed into a “total comedian,” according to six people who attended the event and spoke afterward to the Miami Herald.

He also pulled an unusual move, bringing on stage Army 1st Lt. Clint Lorance and Maj. Mathew Golsteyn, who Trump pardoned last month for cases involving war crimes. Lorance was serving a 19-year sentence for ordering his soldiers shoot at unarmed men in Afghanistan, and Golsteyn was to stand trial for the 2010 extrajudicial killing of a suspected bomb maker.

The president spoke for over an hour, doing impressions of Democrats like House Speaker Nancy Pelosi and joking about the slim physique of Ohio congressman — and former wrestler — Jim Jordan, who was in attendance. He also introduced his son-in-law and senior advisor, Jared Kushner, and North Florida Congressman Mike Waltz.

Trump spent a large part of the speech, attendees told the Herald, praising Florida Republicans for their work in the state.

At one point he called on stage Attorney General Ashley Moody, Chief Financial Officer Jimmy Patronis and all of the Republican state lawmakers in attendance. He especially praised Gov. Ron DeSantis, who he calls “a good guy.”

“DeSantis is always up in Washington bugging me for federal aid and federal money,” said Trump, speaking during the Statesman's Dinner, held at the JW Marriott Turnberry Resort and Spa in Aventura. “He is unabashed in making asks for Florida.”

Trump did not shy away from talking about his business in Washington, either.

Attendees likened parts of his speech to his Twitter feed, where he called the impeachment inquiry “a sham” and a witch hunt.”

“Ever since I came down the escalator to announce , [Democrats] have been after me,” Trump said, according to attendees.

He boasted about the country's low unemployment rate, his own high polling numbers and the success of the Saturday night dinner.

While dinner goers enjoyed nightcaps at the resort bar to the piano stylings of “God Bless America,” Trump was whisked away to Hollywood, where he spoke to the Israeli-American Council, a non-partisan organization backed by major Republican Party donor Sheldon Adelson.

Trump's visit to South Florida was at least his third since early October, around the time he filed paperwork to declare his full-time residence as his Mar-a-Lago estate in Palm Beach. Trump held a belated “homecoming” rally late last month in Sunrise.

Ahead of Trump's visit Saturday, Florida Democratic Party Chairwoman Terrie Rizzo said in a statement that Floridians don't want him “because he has threatened seniors' Medicare and Social Security, rolled back environmental protections needed to preserve our state's natural treasures and made it harder for working families to get by in our state.”