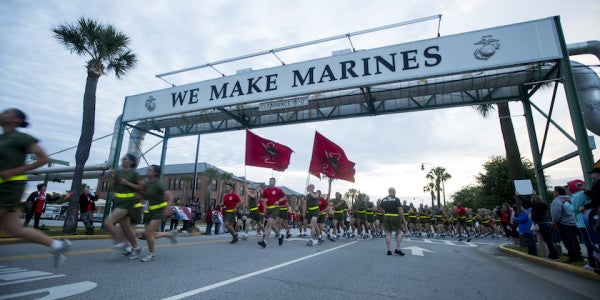 A senior Marine Corps drill instructor forced a recruit to give up his Facebook password so he could hit on the recruit's sisters and made others complete his college homework, witnesses said in an Article 32 investigative hearing at Marine Corps Base Quantico, Virginia, on Thursday.

Staff Sgt. Antonio Burke, whose identity was publicly revealed at the hearing for the first time, may face trial on charges including two counts of cruelty and maltreatment; two count of failure to obey an order or regulation; one count each of false official statement, wrongful appropriation, and insubordination; and five counts of general misconduct. Thursday's hearing will determine whether he will go to court-martial or face a lesser form of adjudication.

Four former recruits from Kilo Company, Platoon 3044, at Marine Corps Recruit Depot Parris Island, South Carolina, testified that Burke, an administrative Marine by trade with nearly 10 years of service, frequently called them names including “stupid” and “f—-t,” among other unprintable expletives, and allowed other drill instructors to do the same.

Multiple recruits testified that the drill instructors would bring members of the platoon into “the dungeon”– an unoccupied building with an abandoned squad bay in disrepair and filled with a fine yellow dust. When the recruits were made to conduct incentive training, or strenuous physical exercise designed for correction, they would cough and struggle to breathe as the dust swirled, they said. These sessions, recruits testified, would last from 10 to 20 minutes at a time.

To demonstrate the hazards of the dungeon, military prosecutor Maj. Gregg Curley presented Col. James Bartolotto, the preliminary hearing officer, with a large jar containing a sample of the dust, shaking it to show how easily it became a thick cloud.

Witnesses also testified that Burke recruited self-identified “smart” recruits to come into the drill instructor hut to help him complete his college homework, a non-authorized activity for recruits, as Burke believed he was falling behind.

The allegations against Burke came to light as part of a wide-ranging series of investigations regarding alleged mistreatment of recruits at Parris Island — a pattern that was found to include abuse that prompted one recruit, Raheel Siddiqui, to take his own life last March.

The alleged misconduct of Burke and a number of other drill instructors in Platoon 3044 was revealed after an anonymous letter from “Concerned loved ones of innocent recruits in Kilo Company” was sent to President Barack Obama in April 2016. In all, 56 recruits and three family members were interviewed as a result of the investigation.

After the investigation was launched, all of the platoon's drill instructors were relieved of their duties and replaced by new ones last summer.

Also accused were Staff Sgts. Matthew Bacchus and Jose Lucena-Martinez, and Sgt. Riley Gress, all of whom face similar charges and are set to be arraigned Friday.

Lance Cpl. Kelvin Cabrera, a reservist with 4th Civil Affairs Group, out of Hialeah, Florida, testified that Burke would force recruits to show him photographs they received from home, sometimes keeping them for himself. After being forced to turn over a family photograph against his will, Cabrera said, he was summoned to the drill instructor hut in April 2016 and told Burke found one of his sisters attractive and wanted him to log onto Facebook so Burke could send messages to her.

When Cabrera refused, he was made to perform burpees, or squat thrusts, until he complied, he said. Bacchus, he said, was also present. After logging on to his Facebook account on Burke's smartphone, Cabrera said the drill instructor expressed interest in another one of his sisters and forced him to call her. Then, Cabrera said, Burke grabbed the phone and tried to ask her out.

“I couldn't explain what was happening,” he said. “She told me not to do that again, to call her and give the phone to a random man.”

While Burke did not testify in his defense, he said in a recording played for the court that his habit of forcing the recruits to show him their photos was an “inside joke” and he never kept them.

Zachary Mosier, a former recruit who was medically separated from Platoon 3044 as a result of an irregular heartbeat after passing out on three separate occasions during intensive physical training, testified that he had received inconsistent levels of medical attention on these occasions, and, under Burke's oversight, had not been seen by a corpsman or medical professionals on the second occasion.

Another former recruit who left the Marine Corps shortly after boot camp due to injury, Evan Murdoch, said Burke had tried to cover up the first incident in which Mosier passed out, falling flat on his rifle during push-ups in what Murdoch described as “excessive” incentive training, lasting longer than the 15 minutes that is allowed.

“He said, 'Look, that didn't happen today, did it,' hinting that no one should say anything,” Murdoch testified.

The commander of Marine Corps Training and Education Command, Maj. Gen. James Lukeman, is expected to make a decision this month on whether to send Burke's case to court-martial.