Why Is This Former Parris Island DI’s Hazing Case Being Switched To A Low-Level Trial?

A former Marine Corps Recuit Depot Parris Island drill instructor alleged to have participated in the hazing and abuse of... 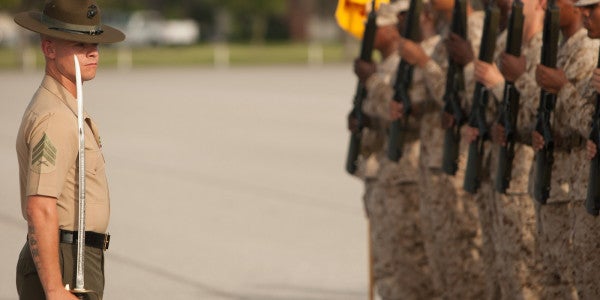 A former Marine Corps Recuit Depot Parris Island drill instructor alleged to have participated in the hazing and abuse of a Muslim trainee — and who was scheduled to be tried in the military’s highest court — will now have his case heard in a low-level proceeding that’s not open to the public.

The Corps’ Training and Education Command (TECOM) announced late Friday night that Sgt. Michael K. Eldridge — accused of numerous violations of military code, including cruelty and maltreatment — will now be tried by summary court-martial — the lowest-level court — instead of general court-martial, as was previously stated.

TECOM’s news release did not specify the reason for the change. “The command will not be able to provide any additional information before the conclusion of the proceedings,” TECOM spokesperson Capt. Joshua Pena told The Island Packet and The Beaufort Gazette in a text message Saturday morning. “The command will provide an update following the conclusion of the summary court-martial.”

TECOM did not answer questions submitted Saturday morning asking whether Eldridge had reached a pre-trial plea agreement, or if he would testify against Gunnery Sgt. Joseph A. Felix, who has also been linked to the incident is still scheduled to be tried by general court-martial.

Earlier in the week the Corps said Eldridge’s case status has “changed” and was pending. Former Parris Island lead prosecutor and local attorney Brian Magee said that, when cases statuses are pending, a variety of things can be happening behind the scenes. Those things range from changes of venues — what has apparently happened to Eldridge’s case — to forthcoming guilty pleas that negate contested trials.

Magee was part of Eldridge’s defense team until a few weeks ago. Citing attorney-client privilege, he declined to discuss why he no longer represented Eldridge. When asked Friday if he knew about the status of Eldridge’s case, Magee said, “I have not been involved with his case in a while.”

Eldridge and Felix are alleged to have hazed former recruit Ameer Bourmeche in July 2015. Bourmeche, who is Muslim, was reportedly ordered to get into a commercial clothes dryer late one night during “Marine Week,” right before he and his training platoon graduated from Parris Island. The dryer door was shut and the machine turned on numerous times. Bourmeche suffered burns, according to a Marine Corps investigation. And, during the incident, he was reportedly interrogated about his loyalty and faith and called a “terrorist,” among other things.

For his alleged part in the incident, Eldridge was accused of violating four Uniform Code of Military Justice codes: failure to obey a lawful general order; cruelty and maltreatment; making a false statement, and being drunk and disorderly.

Eldridge’s court-martial is one of three — Felix’s and Lt. Col. Joshua Kissoon’s are the others — remaining after a depot-wide probe found multiple instances of hazing and recruit abuse. The probe was initiated in the wake of former recruit Raheel Siddiqui’s death and focused on his unit, the 3rd Recruit Training Battalion. The probe’s findings amounted to the worst scandal on Parris Island since the infamous Ribbon Creek incident in 1956, when six trainees drowned during a punitive nighttime marsh when their drunken drill instructor led them into a marsh at high tide.

A Marine Corps investigation has linked Felix to Siddiqui’s death — the two allegedly had an altercation moments before the recruit jumped from the third story of his barracks and later died of his injuries.

On March 18, 2016, Siddiqui reportedly tried to request permission from Felix, his senior drill instructor, to go to medical. Siddiqui apparently failed to appropriately convey the request, and Felix punished him with a series of punitive sprints across the barracks.

Siddiqui collapsed to the floor and, according to some witnesses, was non-responsive. Felix attempted to wake Siddiqui, then he forcefully slapped him in the face multiple times. Then, Siddiqui jumped up, ran out the back of the barracks and vaulted over the third-story railing near the stairwell.

According to the Corps, Felix should not have been supervising Siddiqui’s platoon — 3042, in the 3rd Battalion — because he was already being investigated for the dryer incident, which happened months earlier.

Felix, accused of the same Uniform Code violations as Eldridge, is scheduled to appear at a general court-martial beginning Oct. 30 at Marine Corps Base Camp Lejeune, N.C.

In July, Felix’s attorneys asked a judge to disallow all discussion of Siddiqui’s death and circumstances thereof at the upcoming proceedings. The judge denied that request but did rule to limit discussion of his death to “judicial notice” — an acknowledgment that it did indeed occur — as it relates solely to the obstruction charge Felix faces.

Siddiqui family attorney Shiraz Khan said it was concerning that the discussion would be limited.

“If all that is allowed is ‘judicial notice’ of the fact that Raheel Siddiqui is dead, without any mention of how his death occurred, what is this case really about?” he recently wrote in an email to the newspapers.

A Marine Corps investigation of Siddiqui’s death found that Felix’s actions were “likely the impetus” for the recruit jumping.

The Corps has ruled the former recruit’s death a suicide. His family and Khan disagree.

Kissoon, who also faces a general court-martial for failing to sideline Felix, was arraigned Wednesday. No date has been set for his trial.

Kissoon was relieved of his command of the depot’s 3rd Recruit Training Battalion the day before Siddiqui died, according to the Corps, although that decision was made public two weeks later.

He is the highest-ranking Marine facing court-martial in the wake of the scandal; it is extremely rare for a battalion commander to face court-martial, according to the Corps.

That move is a signal that Kissoon is ready for a fight, military law experts say.

Four other Marines were initially referred to courts-martial in the wake of the hazing probe for their alleged roles in forcing recruits to perform unauthorized punishment exercises in an abandoned depot building called “The Dungeon.”

And Sgt. Antonio Burke was found guilty of abusing his power over recruits on several occasions — and making a strange phone call to a recruit’s sister, inviting her to Miami — at an August court-martial.